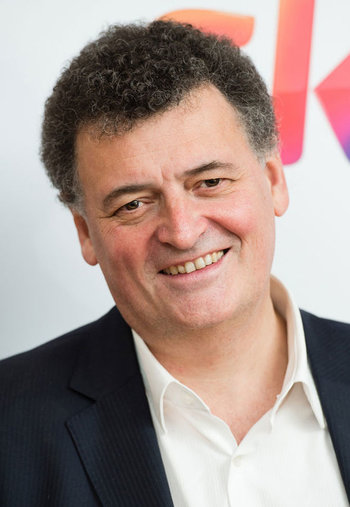 He feeds on fear.
"There's something really cool about scaring children. Traumatize a generation, that's what it's all about."
— Steven Moffat
Advertisement:

Initially becoming involved with Doctor Who writing the 1996 Doctor Who Expanded Universe short story "Continuity Errors" and later the 1999 parody episode Doctor Who: The Curse of Fatal Death, he has gone on to be one of the most critically hailed writers involved in the franchise. In 1999, he was one of the writers asked to contribute for Big Finish Doctor Who, but dropped out because he was only interested in writing for Eighth Doctor Paul McGann— who, at that point, hadn't signed for Big Finish yet. Moffat has since written a short story for one of Big Finish's Bernice Summerfield anthologies as well as a BBC-produced short episode in 2013, "The Night of the Doctor", which starred McGann as the Eighth Doctor.

His credits for the TV series proper include the Hugo Award-winning episodes "The Empty Child"/"The Doctor Dances", "The Girl in the Fireplace", "Blink" (also won a BAFTA) and "The Pandorica Opens"/"The Big Bang". His two-parter "Silence in the Library"/"Forest of the Dead" was nominated as well, only to lose out to Joss Whedon's surprise hit Dr. Horrible's Sing-Along Blog.

In 2010, he eventually replaced Russell T Davies as the head writer and executive producer of Doctor Who, starting with Matt Smith's first scene at the end of the 2009/2010 story "The End of Time" and ending with the final Peter Capaldi story, 2017's "Twice Upon a Time", which the next head writer Chris Chibnall wrote the first scene for Capaldi's successor Jodie Whittaker. Interestingly, Moffat ended up being the first straight creative director for the series since producer Graham Williams stepped down in 1980, thirty years prior; Williams' successor John Nathan-Turner (who produced the show during the final decade of the classic series) and Moffat's predecessor Davies (who was the head writer during the first five years of the revival series) were both openly gay.

Moffat is unabashedly One of Us and loves shipping. Upon becoming executive producer of Doctor Who, he mentioned that he'd applied for the job once before, but "The BBC already had someone else in mind...also, I was seven at the time". As such, he is fonder than even his predecessor of Continuity Nods to the classic series, sometimes reaching the level of Continuity Porn. Chibnall, by comparison, would dial much of this back once he took over Moffat's position, with his tenure being something of a combination of the newcomer-friendliness of Davies' tenure and the socially conscious themes of the classic series's final two seasons.

Frequently throws out red herrings to the spoiler-loving press, calling it "by far the best way of communicating

". He also unabashedly and gleefully lies, teases, and generally drives the fanbases of his shows insane. For instance, he kept the fact that his massively-popular show Sherlock was already commissioned for a third series a year earlier until after the final episode of series 2 aired with a shocking ending, even for those familiar with Holmes lore.

He's known to prefer Timey-Wimey explanations to Techno Babble, gleefully uses Stable Time Loop and Temporal Paradox plots, and plays the Long Game when it comes to dramatic tension: he intentionally planted seeds in Doctor Who back in 2006 that didn't begin to get resolved until the 2013 series finale.note That is, the mystery surrounding the Doctor's real name. He's also fond of esoteric plotting and going beyond the traditional boundaries of the franchise and television as a whole.

In fact, he has written more TV Doctor Who than any other writer, including the late Robert Holmes; like Holmes, many of Moffat's stories were responsible for introducing significant and sometimes controversial character and lore elements to the show that would have a major impact on its direction in the years ahead, for better or for worse.

Born in 1961 in Paisley, Scotland (hometown of Doctor Who star David Tennant) and a former teacher.

In 2015, he was made an Officer of the British Empire (OBE) for his services to drama just like Russell T. Davies before him.

He may be an Evil Overlord. We're not sure and, for his part, he's stayed numb on the matter.

His writing provides examples of: