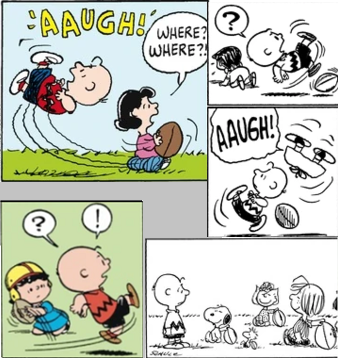 Rinse and repeat ad nauseam.
"You know what? I'm sick of this crap. I'm sick of being the guy who eats insects and gets the funny syphilis. As of this moment, it's over. I'm finished being everybody's butt-monkey!"
— Xander Harris, Buffy the Vampire Slayer
Advertisement:

The character who is always the butt of the demeaning joke or the "put them through hell" plotline. For whatever reason, the Butt-Monkey seems to walk through life with a permanent "Kick Me" sign attached to their backs, invisible to them, but all too visible to the rest of the world. Nothing ever goes right for this character, and if something bad is going to happen to someone, chances are it's going to happen to them. Long story short, it sucks to be a Butt-Monkey.

Simply having a character go through hell once or twice (no matter how severely) is not enough to be the Butt-Monkey. With primary and secondary characters, it must be a regular occurrence. With tertiary characters, it must be their sole purpose to exist. It's not necessarily karma. They don't have to deserve what they go through, but they're an easy target. Sometimes it's all the writers can think of to do with the character.

The direct opposite of a Karma Houdini (although technically the definition applies to those who escape from karma regardless of whether it's good or bad). If carried too far, may result in Deus Angst Machina. This can be counteracted if you occasionally Throw the Dog a Bone, though many writers just can't resist Yanking The Dog's Chain. The Butt-Monkey is occasionally dangerous if they're pushed too far.

If the audience sympathizes with them, they become a Woobie. Furthermore, if the audience begins to resent the "unfair" treatment of the character, they can become the Designated Monkey. The joke can also be dragged too far in other ways — to make a character a Butt-Monkey of fate is one thing; to have them constantly taking the punishment for the misdeeds of an unsympathetic cast is another. However, if the audience relishes the character's misfortune and looks forward to seeing them suffer, congratulations; your Butt-Monkey has devolved into The Chew Toy.

While the trope is often played for laughs and we are encouraged to find the misery at least somewhat amusing, some portrayals go for a much darker presentation, deconstructing the idea and showing what an emotional and psychological wreck such a person may very well be in Real Life.

Almost Always Male. In cases that the Butt-Monkey is female, is regularly used for slapstick and it is Played for Laughs, she is probably also a case of Slapstick Knows No Gender. If every conceivable misfortune happens to the Butt-Monkey, regardless of its logic or lack thereof, you've got yourself a Cosmic Plaything.

If someone is Giving the Sword to a Noob, nine times out of ten this person is the noob. When a plan needs to be executed and others won't touch it, chances are they'll get the dirty job. If a plan requires someone to be The Bait, if the other members of the team don't volunteer, they'll usually get volunteered to do it. However, if someone in the cast other than The Hero is going to Take a Level in Badass, it's almost invariably the Butt-Monkey who does it. If the Butt-Monkey is fat, they may or may not be a Fat Comic Relief, which often are Butt-Monkeys.

See also: Bumbling Sidekick, The Un-Favourite, Guilt by Association Gag, Humiliation Conga, Misplaced Retribution, Iron Butt Monkey. Is nearly always on the receiving end of Comedic Sociopathy. When a character isn't a Butt-Monkey in the work itself, but gets treated as one in Fanon, that's Memetic Loser. If the Butt-Monkey's suffering is a result of their bad deeds coming back to bite them, then they're a Karmic Butt-Monkey, which is also a Sub-Trope.

Do note that the Butt-Monkey is often not meant to be hated by the audience. For characters completely intended to be dislikable, contrast Hate Sink.

In Real Life, every single one of us runs into bad luck now and then, so said examples are not possible.

Alternative Title(s): Who Gets Stuck With All The Bad Luck