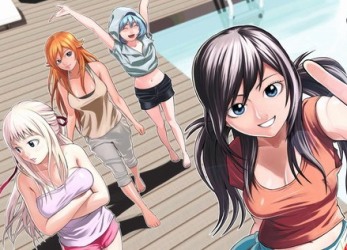 The heroines, from left to right: Seul-Gi, Gyu-Ri, Yang-Miri and Da-Yeon
The hardships of an adolescent life, especially when it comes to love. Three third year high school students, Yo-Han, In-Young and Sul-Min, spend their school life discussing girls, specifically about their 3 sizes and who’s the most beautiful in class, and not much about real relationships since they’ve come to terms about their popularity (or lack thereof) as the class losers who won’t get to date anyone, ever.
Advertisement:

One day, in the middle of their usual discussion about girls, Yo-Han is suspicious about one of their classmates being in a serious relationship, and the three quickly find out that Han-Kyul is the one dating, as they get a view on his present, in commemoration of their 100th day together, to his girlfriend; the trio decides to follow Han-Keul and witness who’s the girl he is dating, if she’s a beauty or not. The trio spies on Han-Kyul trying to present Gyu-Ri with the commemorative gift, and to the peeping toms' surprise the handsome, thoughtful Han-Kyul gets rejected and Gyu-Ri breaks up with him right there; surpringly enough Han-Kyul takes it up well and even gives the present as a parting gift. the loser trio admires Han-Kyul's attitude and decides to welcome him in their group and “teach” him all about girls.

From here on begins the story of Need a Girl! (also known as I Wanna Make a Girlfriend!), written by Byung-Min Rue and drawn by Hyun-John Bahk. Four guys trying to figure out how to get a girlfriend, three perverts and a seemingly out-of-place handsome guy find themselves in the craziest situations in order to peep at girls' bodies and know what they like in order to score one of them. The story is equally divided between: Yo-Han, In-Young, Sul-Min and Han-Kyul as they are paired with four available love interests: Yang-Miri, Seul-Gi, Gyu-Ri and Da-Yeon respectively. The catch is they are too perverted or dense to notice this, so they continue with their perverted antics much to the chagrin of the girls, who try to keep a safe distance from them; but little by little the guys get wind of their feelings and develop a closer connection with them, each in their own way.

This manhwa provides the examples of: