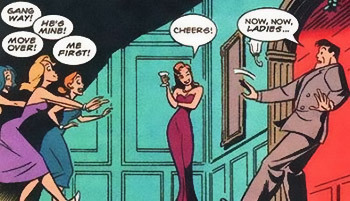 A chick magnet in his natural environment.
"D-do I really inspire that sort of frothing desire in the female masses?"
— Miles Edgeworth, Ace Attorney
Advertisement:

A Chick Magnet is a guy who draws girls to him like bears to honey (and if he's not careful, with similar results). He's not The Casanova or Kavorka Man, but he pulls girls in about as fast as they do, if not faster. Unlike these scoundrels, even when he does finally realize the feelings of the girls around him, he never tries to take advantage of them. He can charm the pants off any girl, of about any age, without even trying, and he usually doesn't. He may not know just the right things to say to a girl, but says them anyway. This usually means he ends up with two or more girls vying for his affections at the same time.

This trope comes with an amount of Wish-Fulfillment for both genders. Although the main title is "Chick Magnet" because Most Writers Are Male, plenty of Gender Inversion happens because Most Fanfic Writers Are Female. This inversion is called "Dude Magnet".

Overlaps often with the Unlucky Everydude and occasionally Unwanted Harem. Chaste Heroes and Celibate Heroes are highly likely to be this. May result in the Magnet invoking Love You and Everybody if the Magnet doesn't want to break their hearts, or lose any of them if/when they finally choose the person they really love. Cranking this magnetism up results in Even the Guys Want Him/Even the Girls Want Her, The Pornomancer, Really Gets Around, A Threesome Is Hot and Three-Way Sex. If the characters only attain this level of popularity after they have a girlfriend/boyfriend then Magnetic Girlfriend is in effect.

See Mr. Fanservice/Ms. Fanservice for characters designed to be a magnet for real-world people. Compare Clueless Chick Magnet, when the Chick Magnet doesn't even notice the effect he has and The Charmer, who is seen as charismatic by others, including men. Compare Head-Turning Beauty. Can lead to a Love Dodecahedron.

Pun not intended. Roberto manages to make some females faint just by looking at them during his song Welcome Back.

Pun not intended. Roberto manages to make some females faint just by looking at them during his song Welcome Back.