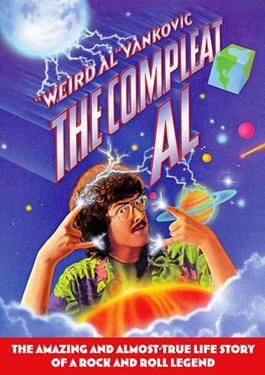 "Who does he think he is?"
Advertisement:

The Compleat Al is a 1985 mockumentary about the life of "Weird Al" Yankovic. It was partially written by Yankovic and directed by Jay Levey. It stars Al Yankovic As Himself, Kevin Seymour as Al's agent Barry Cohen, and Bill Martin as the narrator.

The film originated because CBS Home Video asked Yankovic to make a long form music video. Al and his team expanded the idea into a mockumentary that doubles as a Framing Device for Al's various music videos. An hour-long version premiered on August 7, 1985 on the Showtime network before the full film was released a month later.

The title of the film is a parody from the 1982 documentary The Compleat Beatles.

While it was difficult to find for years, the film is available now on DVD, YouTube

Not to be confused with Al's other 100% accurate, unadulterated, and completely verified correct biopic, Weird: The Al Yankovic Story.

Tropes in The Compleat Al: