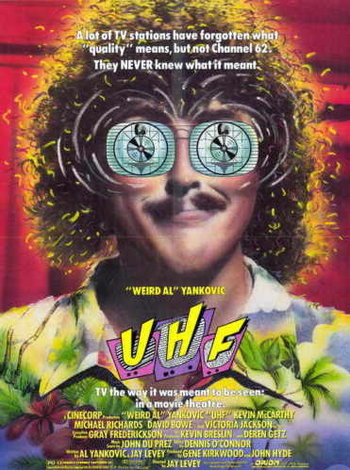 "We got it all on UHF"!
Bob: I don't know about this, George. We don't know the first thing about what goes on in a television station.
George: Don't worry, Bob. It's just like working in a fish market! Except you don't have to clean and gut fish all day.
Advertisement:

UHF is a 1989 movie starring "Weird Al" Yankovic, written by Al and his manager Jay Levey (who directed). Al plays George Newman, a young man with an all-too-fertile imagination adrift in life. After getting himself and his friend and roommate Bob fired from yet another job due to excessive daydreaming, he is appointed by his uncle Harvey as manager of Channel U62, a local UHF television station that Harvey won in a poker game.

George and Bob soon discover that U62 is near-abandoned, with a support staff of four, almost no reception to speak of, and nothing but stale reruns for programming. With optimistic enthusiasm, George tries to revitalize the station's schedule, but quickly realizes that the channel is already pretty much destined for bankruptcy; the local airwaves are dominated by Channel 8, a network affiliate VHF station whose owners are card carrying villains with good publicity.

The station's fortunes change when, in a fit of pique, a depressed George carelessly puts station janitor Stanley Spadowski (Michael Richards) in charge of the channel's morning kids' show; to everyone's surprise, Stanley's Cloud Cuckoolander antics become an instant hit across all demographics. Emboldened and flush with new ad revenue, George unleashes the full force of his creativity with a line of unique, oddball shows to fill out the rest of the schedule, with Stanley as their flagship superstar. These moves quickly catapult U62's ratings to #1 in town — which prompts Channel 8 head honcho R.J. Fletcher (played by sci-fi B-movie legend Kevin McCarthy) to take them down by any means necessary...

Like Weird Al's music, the film focuses its comedy on oddball humor and satire, parody, and pastiche of pop culture. Released in 1989 at the height of Weird Al's popularity, the film was expected to be a summer blockbuster, buoyed by enthusiastic test screenings. Unfortunately, the movie opened on July 21 and was surrounded by nearly a dozen other summer blockbusters playing at the same time.note Specifically, Indiana Jones and the Last Crusade, Ghostbusters II, Honey, I Shrunk the Kids, Lethal Weapon 2, Batman (1989), Licence to Kill, When Harry Met Sally..., Do the Right Thing, and Weekend at Bernie's As a result, UHF barely broke even at the box office and was relegated to obscurity, until eventually finding itself as a Cult Classic thanks to home video and cable showings.

For information on the movie's soundtrack and Al's sixth studio album, go here.

TV the way it was meant to be seen. In a trope listing.:

Philo: Well, it appears that my work on this planet is complete! I must now return to my home... on the planet Zarcon.
George: Okay, well... have fun!
Feedback

R.J. Fletcher's attempt to defame Channel 62 and delay their telethon are foiled when Philo hijack the broadcast with footage of Fletcher saying what he REALLY thinks of his audience.

R.J. Fletcher's attempt to defame Channel 62 and delay their telethon are foiled when Philo hijack the broadcast with footage of Fletcher saying what he REALLY thinks of his audience.