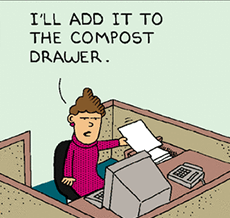 Cracking gum and cracking wise. Often with a very nasal voice, usually with a Joisey or Brooklyn accent.

Dates back to the 1930s at least, with Sam Spade's secretary and Joan Blondell in any number of movies, making this Older Than Television.

May also be a Sexy Secretary or a Plucky Office Girl. May be contrasted with a High-Powered Career Woman. Due to the interpersonal nature of the role, they may be The Face of their group. See also and related to Sarcastic Devotee.