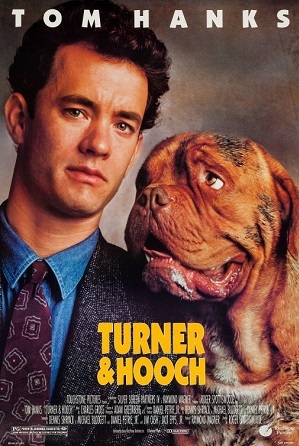 A 1989 comedy film directed by Roger Spottiswoode, starring Tom Hanks (and a dog).

Scott Turner (Hanks), an obsessively neat police detective, acquires Hooch, a large and slobbery Dogue de Bordeaux, after the murder of the dog's master Amos Reed (John McIntire), a local junk-yard owner who was a friend of Turner's. Turner is bored with little police work in the fictional town of Cypress Beach, California and is set to transfer to a better job in Sacramento, while fellow detective David Sutton (Reginald VelJohnson) is slated to be his replacement.

Turner pleads with police chief Howard Hyde (Craig T. Nelson) to let him take on Amos' murder case. Believing that Hooch is the only "witness" he has, Turner brings him home. The energetic dog promptly destroys Turner's house and car and turns his life upside-down. On a positive note, however, Hooch also instigates a romance between Turner and the new town veterinarian Emily Carson (Mare Winningham).

In 2020 it was confirmed that a TV series based on the film (with the same name) would be coming to Disney+ by 20th Television. The show stars Josh Peck as Scott Turner Jr., a U.S. marshal; the series acts as a Distant Sequel to the film. The show aired its first episode on July 21, 2021.

Came out the same year as K-9, an unrelated film with a similar premise.