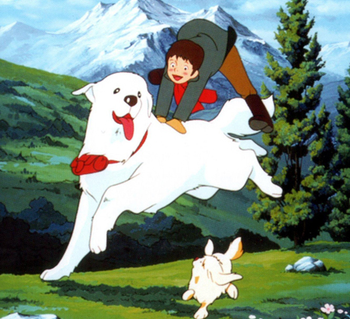 The opposite of the Angry Guard Dog, this canine Gentle Giant is big, friendly and often somewhat dim-witted, will only "kill" you (if at all) by licking you to death, and is likely to knock you over because he's just so happy to see you. Slobber included free of charge.

Sometimes the "big" part can be taken to extremes (see the mention of Clifford, below) or have the dog be big enough (or the kid small enough) to ride on. In other hand, due to their likeable appearance, a Big Friendly Dog can often invoke Cuteness Proximity. In Real Life, large dogs tend to have shorter life spans than their smaller counterparts, but this is mostly glossed over in fiction.

See also Canis Major, Mega Neko, Precious Puppy and Cute Kitten. Mister Muffykins is generally the polar opposite in both size and temperament. Also contrast Bully Bulldog, Psycho Poodle and Hellhound. Compare Gentle Giant. Very often a Heroic Dog if they get the chance. Even a Big, Friendly Dog is still a descendant of the wolf, so don't discount the possibility of a canine version of Beware the Nice Ones if you threaten his pack.