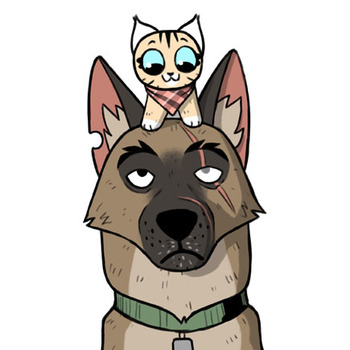 "Did you know that after military dogs retire, they can be adopted into regular civilian families?..."
— Opening Caption

Pixie and Brutus is a 2018 webcomic by Ben Hed. Pixie, a sweet, energetic kitten, meets new pet Brutus, a German Shepherd who has a military background. Brutus quickly takes Pixie under his protection, and the two develop a strange bond.

For another work by the same author taking place in the same universe, see Lola and Mr. Wrinkles.

This webcomic includes examples of the following tropes: