Too Good to Last 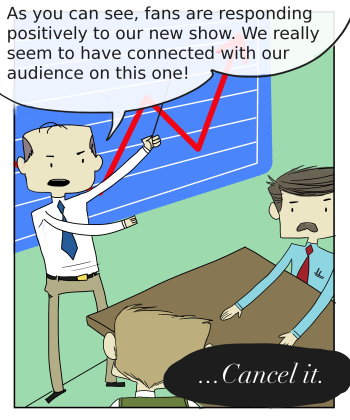 An intelligent, well written show, usually a subtle blend of comedy and drama, beloved of a devoted group of fans and critics. So why did it never have a chance?
Advertisement:

Either the mainstream isn't interested or the network never even gives it a chance to build an audience. Or the creator buckles under the growing pressure to keep making high-quality installments. Sometimes, someone high up at the network takes a dislike to the show and does everything in his power to kill it. Other times the network doesn't think it fits in. If the show is lucky enough to be shown on a cable network in reruns, it may build up a bigger following there than it ever had in its first run.

The observant reader will note that the vast majority of Too Good To Last shows are from the last 15-20 years. This is likely because of the increased emphasis on ratings above all else. On the other hand, the list might be biased toward the past decade because shows like this have an unfortunate tendency to fall off the face of the earth upon cancellation, so our ability to recall and report them is inversely proportional to how long ago they aired.

There's always been an emphasis on ratings in television, but it seems to have become much more pronounced since the early 1990s. It is widely commented upon that Cheers was dead last in the ratings among all regular series in its first season (1982-83), and that a show doing that badly today would almost certainly be canceled within its first month or two. This isn't necessarily a new phenomenon, but some shows only survive by having a network president who is a fan.

Another theory is that the advent of the Internet and the explosion of cable channels has made it harder for these too-soon canceled shows to be forgotten.

For those shows that manage to pull out a few seasons with plenty of network problems before going under, check out the Exception section at the bottom of this page. The main entries are about shows that barely managed to get out a single season, if that. Incidentally, some shows end up canceled only to be Un-Canceled by the network or do a Channel Hop.

Of the exceptions and shows that were Un-Canceled, only a handful were aired on non-cable networks. A series that is Too Good To Last may have better chances on cable than on broadcast networks, in part because cable doesn't demand ratings as high in the first place for the show to be considered a success.

Unfortunately, the fans are only rarely told what would have happened next, because the now unemployed/transferred writers will generally want to recycle their unused ideas into their next job.

Shows that are Too Good To Last can be Short-Runners, but sometimes they are longer.