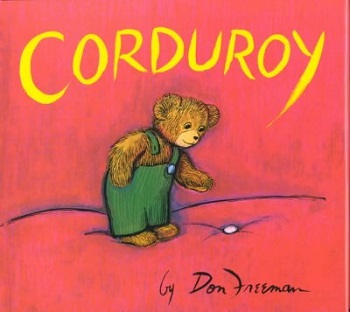 "You must be a friend. I know I've always wanted a friend."
Advertisement:

Corduroy is a children's picture book by Don Freeman that was first published in 1968. It follows the story of Corduroy, a teddy bear living in the toy section of a department store. A young girl named Lisa wants to buy him, but his mother dissuades her from doing so due to the fact Corduroy is missing a button from his overalls. Realizing that his missing button is the one thing preventing him from finding a friend, Corduroy goes in search of a replacement button that night. As he explores the department store to find his precious button, our little teddy bear gets himself into different shenanigans.

The book possesses two sequels, though only the first one was done by Don Freeman, who passed away the same year it was released. The second sequel, which was done by B.G. Hennessy, has its own page.

Corduroy and its first sequel have also been adapted into other mediums, most prominently television. There was a short telefilm of the original book produced in 1984, as well as a direct-to-video animated series called The Adventures of Corduroy in 1997 that was produced in Canada. However, it was most famously adapted in 2000 for a 13-episode series by the Canadian animation studio Nelvana for PBS Kids in the United States and TVOntario in Canada. Every episode of Nelvana's adaptation is up on Youtube through their Treehouse Direct channel

A live-action/CGI feature film adaptation was announced on November 14th, 2016

originally by CBS Films. It wasn't until December 11th, 2020

when Tim Story was announced as the film's director, alongside Jon Dorsey (This Is Us) as the film's screenwriter, and co-produced by Walden Media.

This picture book provides examples of: