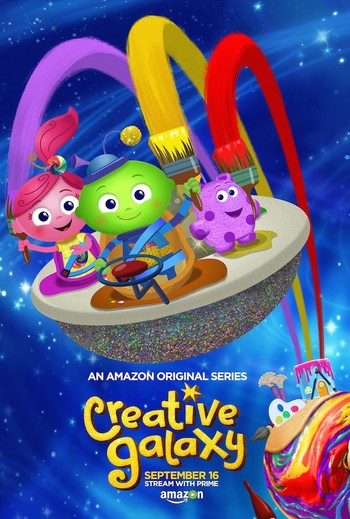 "We can fix this with art!"
Advertisement:

Creative Galaxy is a 2013 animated series produced by Amazon Studios for Prime Video. The series focuses on the adventures of Arty, a young green alien boy with an amazing talent and enthusiasm for art in many forms. In each installment, Arty is joined by his shapeshifting blob friend Epiphany as well as his mother, father, baby sister Georgia and one or more friends. Every story involves an art-related problem to solve, which Arty takes care of by hopping in his Creative Spark rocket ship to visit artistic worlds such as Paperia or Fabrictopia. Creative Galaxy currently has two seasons and is available to anyone who has Amazon Prime or is subscribed to Amazon's separate Amazon Video service. The first episode has also been made available freely on Amazon and other sources for anyone that wants to sample it. The series is from Out of the Blue Enterprises, a company formed by many of the creators of Blue's Clues and many of the staff that worked on that show are involved with this one, such as Angela C. Santomero. Donovan Patton, "Joe" of Blue's Clues, voices a chef in the show's second season.