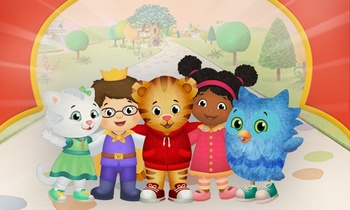 The main characters of the show.Note From left to right: Katerina Kittycat, Prince Wednesday, Daniel Tiger, Miss Elaina, and O the Owl. Not pictured: Jodi Platypus or Chrissie
"It's Daniel Tiger's Neighborhood, a land of make-believe
Won't you ride along with me?
It's Daniel Tiger's Neighborhood, so much to do, so much to see
Won't you ride along with me?
I've got lots of friends for you to meet in this land of make-believe
A friendly face on every street just waiting to greet you!"
Advertisement:

Daniel Tiger's Neighborhood is an animated children's series that began airing on September 3, 2012, on the PBS Kids block of most PBS stations in the United States. The program is an animated Spin-Off of the beloved Mister Rogers' Neighborhood and features the little four-year-old son of the Daniel Tiger character first seen on that series, as well as some other familiar characters like Prince Tuesday. Daniel Tiger's Neighborhood was created by several of the creators of Blue's Clues and is a production of their production company, Out of the Blue Enterprises. The series is animated in CGI, but uses Adobe Flash for its song segments and also features interstitials with real kids.

Daniel Tiger's Neighborhood is targeted at young audiences around the age of 2-4, rather than the wider target audience of Mister Rogers' Neighborhood and carries a focus on social development and emotions. Each installment features Daniel either at home, at one of his friend's houses, or at school with his friends. The show was made with the direct involvement of the Fred Rogers Company and had been in development for six years after the company realized it could not survive without making a new show.

Fred Rogers had considered grooming a replacement before his death, but could never find someone suitable, and the creators decided not to include any character intended to represent a form of Rogers in the series for this reason. Despite this, the program contains many nods to the original show. In 2013, the program won the Parents Choice Award

The program airs weekdays and is presented in widescreen HD where available. Episodes were once available on Netflix and Hulu. Following an exclusivity deal in 2016, the series is now only available on Amazon Prime in the US, although Netflix reinstated some of the episodes for certain

markets outside the US in late 2017. Some episodes are also made available to watch online at the PBS website, or their app for those who live in the US (or is behind several proxies, one of which is in the US). A number of DVD releases have also been made available.

Following the success of this show, another program with modern versions of Fred Rogers' characters, Donkey Hodie, was created.

"It's such a good feeling, a very good feeling
A feeling you know...
That I'll be back, when the day is new
And I'll have more ideas for you
And you'll have things you'll want to talk about...
I... will... too.
Because, it's you I like."
Feedback

Mrs. Tiger has a cold.

Mrs. Tiger has a cold.