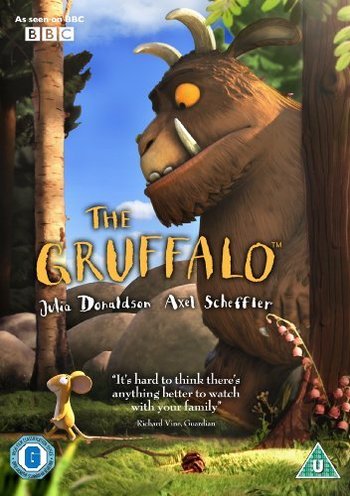 The Gruffalo is a 1999 children’s book, written by English writer Julia Donaldson and illustrated by German-born illustrator Axel Scheffler.

Told entirely in rhyme, the book tells the story of a clever mouse walking through a forest in search of a tasty nut is beset by a series of predators, all of who want to eat him. Each time, he manages to scare them off by telling them that he’s on his way to meet a "gruffalo", which he describes in such frightening terms that they all run off, whereupon he chuckles to himself that "there’s no such thing as a gruffalo" — or so he thinks. Eventually, he does meet one which looks exactly as he described, and it wants to eat him too!

The book is easily Donaldson’s most popular, selling over 13 million copies, winning numerous awards and being translated into more than 30 different languages, including four different Scots dialect versions. A highly successful sequel, The Gruffalo's Child, was published in 2004.

Both books would eventually be adapted into animated short film by The BBC that was directed by Max Lang and Jakob Shuh, with the voice cast including James Corden as the mouse, Robbie Coltrane as the gruffalo, Tom Wilkinson as the fox and John Hurt as the owl. Helena Bonham Carter also stars as a newly-created mother squirrel character narrating the story in a framing device. The same team would go on to adapt Donaldson's other book, Room On The Broom, in the same style.

The Gruffalo uses the following tropes:

Tropes distinct to the animated film: