"Getting Ready for Bed" Plot 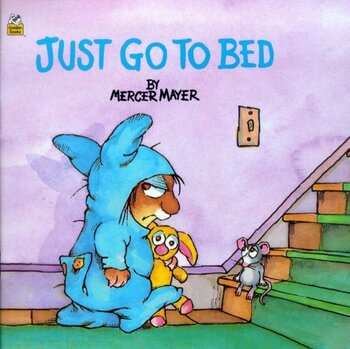 Sleep thoughts are spreading throughout the whole land. The time for night-brushing of teeth is at hand.
— Dr. Seuss's Sleep Book
Advertisement:

Now, this doesn't mean stories where a character is already in bed and having trouble sleeping; that's Insomnia Episode. It's also not about works that take place at night, or any story that has a person get ready for bed. These are stories which are entirely about the bedtime routine.

A common variation on this plot is to have a young (about two through six or the equivalent age in their species's years if an animal) protagonist who is resistant about getting ready for bed, but inevitably ends up going to bed anyway, sometimes leading to An Aesop about sleep being important. Quite often they'll ask for more toys/stories/snacks/trips to the bathroom/drinks and will firmly be told "no".

Another variation is that the young protagonist doesn't mind going to bed but is fearful of monsters or ghosts hiding under their bed or in the closet. Usually if this is the case, they'll learn that either monsters/ghosts don't exist, or that they do exist but are friendly and may even be scared of the protagonist!

Also common is the plot where a whole lot of people are going to sleep. Often, they'll say that everyone in the world is falling asleep, despite the fact that time zones exist and it's always daytime somewhere. They might have all the daytime animals falling asleep while all the nocturnal animals are waking up, but sometimes, they'll botch that up. Plots where lots of people are falling asleep tend to involve even the adults wanting childish things like a goodnight kiss.

Plots like these are often meant to be bedtime stories and some end with the phrase "Now it's time for you to go to bed too" or similar. Another common ending is for the protagonist to fall asleep and the narrator to say, "Goodnight, so-and-so." Sometimes, they'll talk about how "even X needs to sleep" and if someone going to bed has a distinctive job/pastime, they might describe the character as being "tired from doing X all day".

If a story with this kind of plot is read by an In-Universe character, they'll often find it boring, or their audience will, or it will put the audience to sleep before the story finishes, or it will put the reader to sleep. May overlap with Getting the Baby to Sleep if it's at night, takes up the whole plot, and people use wacky methods.

Do not confuse this at any cost with Ready for Lovemaking, which is about "getting to bed" in a completely different sense.