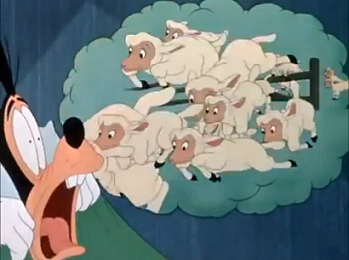 "STAMPEDE!"
Cowardly Lion: I haven't slept in weeks.
Tin Man: Why don't you try counting sheep?
Cowardly Lion: That doesn't do any good — I'm afraid of 'em.
— The Wizard of Oz
Advertisement:

A character desperately needs to get to sleep. Maybe they've been awake for three days straight; maybe they have an important meeting to attend in the morning. But for whatever reason, no matter how hard they try or how much they toss and turn, they simply can't fall asleep.

Cue the character trying to get to sleep by counting imaginary sheep. Cartoons may show the sheep in an Imagine Spot. Those sheep may be jumping over a fence, walking into frame, or simply standing in a field; it doesn't matter. The intention is to drift off to sleep through the sheer boredom and repetition of counting them.

Unfortunately, proven by science to be ineffective in real life.

Because most people know (normally through personal experience) that counting sheep does not help the counter to fall asleep, this trope is rarely played straight nowadays. More often than not, it can be found:

Very often, it will be Played for Laughs. When it's ineffective, the trope can also be used to show how serious the character's insomnia is. When it's too effective, on the other hand, it shows how easily the character drifts off to sleep.

"A Jorb Well Done" features a variation, where Coach Z sees plenty of Strong Sads jumping through a fence before sleeping, all of them saying "Job".

"A Jorb Well Done" features a variation, where Coach Z sees plenty of Strong Sads jumping through a fence before sleeping, all of them saying "Job".