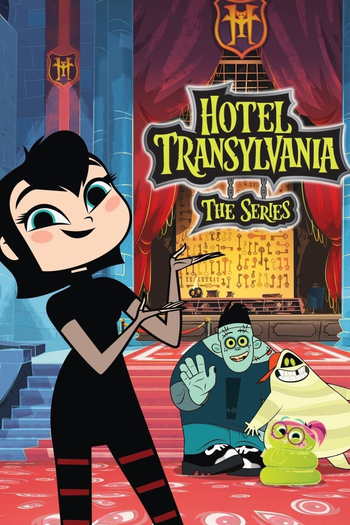 A prequel television series based off the movie series of the same name, Hotel Transylvania: The Series is a joint production between Sony Pictures Animation and Nelvana, in association with Nelvana's parent company, Corus Entertainment.

The show takes place sometime before Mavis met Johnny in the first movie and focuses more on Mavis when she was slightly younger (114 as opposed to 118 in the first movie. Essentially she's the vampire equivalent of a 14-year-old and the show is covering her "teenage" years). Dracula has to leave the hotel to conduct some vampire business and left it in the charge of his older sister, Lydia. However, whereas Drac was traditional but a fair enough boss who was open to new ideas, Aunt Lydia is even more strict and uncompromising in her methods. Mavis and her friends Hank N. Stein, Pedro the mummy and Wendy Blob, however, seek to enact their own ideas and make the place more fun for its visitors, much to Lydia's chagrin.

The series premiered on Disney Channel in the United States on June 25th, 2017 and Teletoon in Canada on October 7th, 2017. The remainder of season 1 was released on Netflix in the United States on June 25, 2018, before either network could finish airing it. A second season was announced in September 2018 and began airing October 8, 2019. After no word it was eventually revealed the show was cancelled and ended in 2020.

Mavis drinks too much blood while she's supposed to be guarding a casket.

Mavis drinks too much blood while she's supposed to be guarding a casket.