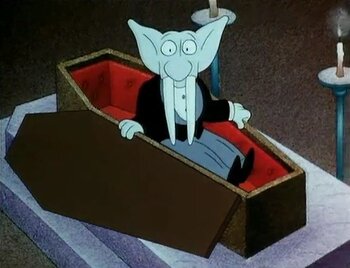 Ernest Le Vampire is a French animated series written by François Bruel in SEK Studio, and directed by José Xavier, that originally ran from 1989 to 1991 on France 3. It has been shown in English-speaking countries as Ernest The Vampire.

Each episode is around 2 minutes and 30 seconds long, features no dialogue, and follows the activities of the title character, Ernest, a (somewhat elephant-like) vampire. The plot of the episode can range from following Ernest's failed attempts to find victims (most likely to drink their blood) to Ernest attempting a simple daily chore that ends up going awry.

Every single episode ends badly for Ernest, and at times even results in his death, but the episode is always revealed to be All Just a Dream.