Western Animation / How to Hook Up Your Home Theater 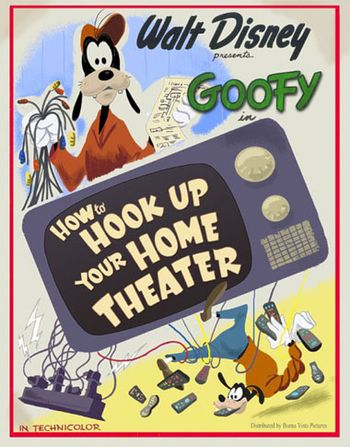 Surge-protected powerbar, a spaghetti of AV jacks and a vintage two-dialer. How's that for Schizo Tech?
Advertisement:

A throwback to Classic Disney Shorts animation, as well as an experiment with "paperless animation", "How To Hook Up Your Home Theater" is a 2007 short starring Goofy, in a short that obviously draws much of its inspiration from Goofy's "How To" shorts of the 40's and 50's. The short in question features Goofy trying to acquire a big TV and all other components as the narrator provides commentary on how it's all done - all while lampooning just how many accessories and commercial items are available for the taking as far as TV goes.

Originally shown in front of National Treasure 2: Book of Secrets, it has since been released on the "Walt Disney Animation Studios Shorts Collection Vol.1" DVD/Blu-Ray.