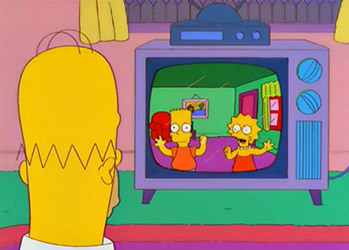 "Dad, you've got to get us out of here! Use the remote!"
"This is what I call a drive-in movie!"
— Carlos, The Magic School Bus, "Spins a Web"
Advertisement:

A group of characters, often a mix of heroes and villains, are trapped by some form of Applied Phlebotinum inside the world of literature, video games or the like, but most often, television. Either they must learn to cope with their newfound environment until some way can be found to escape, or they will jump from channel to channel, hitting a multitude of clichéd worlds and thin parodies.

A plot very much at home in a Super Hero spoof or other comedy show with a loose set of physical constraints. It's a wacky plot that allows the writers to have fun with the tropes this wiki catalogues, and make it all moot at the end without a Snapback.

Most times, one of the cast members will be Genre Savvy, or even a fan, and will use that knowledge to beat the system, and many times there is also a Genre Blind character, that is too serious, sane and is not into that kind of entertainment, and insists in using real-world logic in a place where that doesn't apply, and becomes the victim, the Butt-Monkey or The Millstone.

Most common in animation, where "building" all the new environments and sets is easy and cheap. Well, easy. Also common to Fanfic Fuel.

There's an unspoken rule that, somewhere in the universe, there is a show similar to Star Trek: The Original Series.

Overlaps sometimes with The World as Myth. This trope is infrequently connected with its opposites, the Refugee from TV Land and Real World Episode.

Sub-Trope of Anomalous Art and Trapped in Another World.

Compare with Portal Book, which can trap characters in Book Land and is frequently paired with a "Reading Is Cool" Aesop, and Media Transmigration, which is when the protagonist is permanently transported into the Show Within a Show, usually due to death. Compare and contrast Intrepid Fictioneer, for when the travel is deliberate. See also Fisher Kingdom, if the channels change the visitors.

SHUM is an altered item arcade machine that creates game-scapes based on the user's mind.

SHUM is an altered item arcade machine that creates game-scapes based on the user's mind.