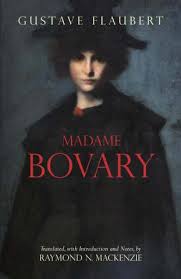 Gustave Flaubert's uber-detailed novel about the eponymous Madame Emma Bovary, a middle-class doctor's wife who has the imagination to want more out of life, but not the cleverness to avoid unrealistic romantic fantasies. When first her stolid husband and then her adulterous lovers refuse to behave as they do in her favourite novels, the betrayal leads her to violent dissatisfaction, ruinously extravagant debt, and finally suicide.
Advertisement:

Purposely melodramatic, it was an implicit critique of the bourgeoisie, a class of which Flaubert was unashamed to be a member. It was also a deconstruction of the Romantic novel. Since modernism is a reaction to Romanticism, said to be the forerunner of modernism à la Franz Kafka.