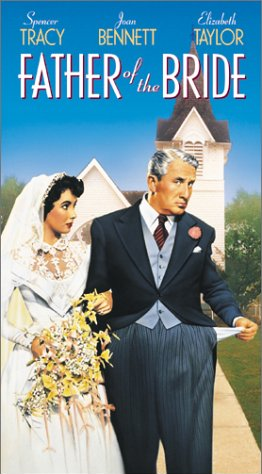 Stanley is not happy about this.
"I always used to think that marriages were a simple affair. Boy meets girl. Fall in love. They get married. Have babies. Eventually the babies grow up and meet other babies. They fall in love. Get married. Have babies. And so on and on and on. Looked at that way, it's not only simple, it's downright monotonous. But I was wrong. I figured without the wedding."
— Stanley Banks
Advertisement:

Father of the Bride is a 1950 film directed by Vincente Minnelli, starring Spencer Tracy, Joan Bennett, and Elizabeth Taylor, based on a 1949 novel by Edward Streeter.

Stanley and Ellie Banks (Tracy and Bennett) are an upper-middle-class Long Island couple with three children, the eldest of whom is 20-year-old daughter Kay (Taylor). Kay rather casually admits to her parents that she is engaged to marry one Buckley Dunstan (Don Taylor). The main plot involves the increasingly chaotic preparations for a fancy upscale wedding, and Stanley's increasing anxiety over the enormous bill that he, as the bride's father, has to pay. Eventually it becomes clear, however, that the real cause of Stanley's stress is separation anxiety over his only daughter growing up and leaving the nest.

One of the first grown-up roles for Elizabeth Taylor, who neatly averted Former Child Star syndrome and made a smooth transition into playing adult roles. Minnelli and the cast reunited a year later for a well-received sequel, Father's Little Dividend, which centers around Stanley's consternation at becoming a grandfather.