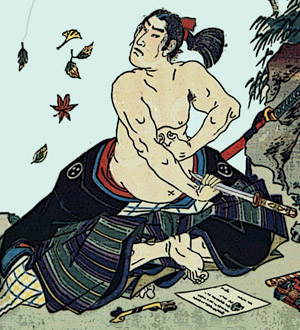 A dead silence followed, broken only by the hideous noise of the blood throbbing out of the inert heap before us, which but a moment before had been a brave and chivalrous man. It was horrible.
— Algernon Mitford, Tales Of Old Japan
Advertisement:

You're a samurai and you're either very depressed, very pissed off, or both. You've been pigeon-holed into choosing between obeying foolish or evil orders or abandoning your warrior ideals. Either way, you're screwed.

Time to send a message. Those gaijin may say it with flowers, but samurai say it with bowels. Their own bowels to be precise. For a true Samurai Warrior Poet, this is the only third option you can take to preserve your honor.

Seppuku is a centuries-old Japanese rite of suicide — literally, "stomach cutting". Harakiri (often misspelled as "hari-kari" or worse) is a more in-speech term for the same thing but refers very simply to the act of stomach cutting, while "seppuku" is the term for the proper ceremony. Many people have incorrectly believed that harakiri is a more vulgar term, but it is not true. The words actually share the same kanji, albeit in reverse: "seppuku" is the on-yominote Sino-Japanese, borrowed from the Middle Chinese words tset (cut) and pjuwk (belly) reading of those kanji (with the part meaning "cut", read setsu alone, first), while "harakiri" is the kun-yominote Native Japanese reading with the part meaning "belly" (hara) first. To perform harakiri is to simply perform the stomach cutting on one's own, and to perform seppuku is to perform the full ceremony with proper clothing, knife, posture, and sheet/platform, with witnesses and decapitator present. How and why seppuku is to be performed, what it means, and so on depends on the historical era, gender, and context. The Theme Park Version, however, is this:

After a period of meditation, the samurai walks out before a number of witnesses and sits seiza on a white sheet or platform. He'll be wearing white, a color associated with death and burial in Japan (and on which blood stands out so well). A special knife is set before him, and a stern-looking dude stands behind him with a raised sword. The samurai says whatever the drama necessitates, then rams the knife deep into his abdomen, curving up into his chest cavity, and slowly pulls it from left to right. The stern-looking dude is a kaishakunin, or "second"; he is expected to be a sport and cut off the samurai's head before he loses his composure (after all, it's just bad suicide etiquette to show pain while you're disemboweling yourself). How soon this happens depends on the kaishakunin's respect for the samurai in question; too early, and he shows contempt by not giving the samurai a chance to show his honor, but too late, and he forces the samurai to endure the entire ritual.

Contrary to popular belief, the kaishakunin isn't actually supposed to decapitate a person during seppuku; doing so often led to the severed head bouncing off the samurai's body in a very undignified fashion, which defeats the whole purpose of seppuku (and also causes huge cleanup issues, because corpses were considered unclean and any bit of ground the head touched would have to be dug up and replaced). Instead, a proper kaishakunin cut is to leave the head attached to the body by a bit of skin and neck muscle (à la "Nearly Headless Nick"). The difficulty of making this cut — and the importance of doing it correctly the first time — meant that being a kaishakunin was a huge responsibility.

It should be noted that in many cases (perhaps the majority), seppuku was effectively a form of capital punishment for the samurai caste — they weren't killing themselves willingly, but rather under orders from their lord. In cases where it was thought the samurai might waver, or couldn't be trusted with a weapon of any kind (there were cases where, when presented with the dagger, samurai attempted to free themselves), a ritualized process was used. Rather than using a knife, the samurai in question would touch their stomach with a paper fan, at which point the kaishakunin would make the fatal cut. Seppuku manuals written during the Edo period even suggest where young children or teenagers are concerned, to convince the victim that the act is merely a rehearsal.

There was a different process for women called jigai,note Literally "suicide", so in Japanese it can refer to any form of suicide in general, regardless of who does it or how it's done. as disembowelment is considered unladylike. A suicidal woman sits seiza with her legs tied up so that they won't fall open scandalously after she dies, and then she slices her jugular vein with a knife. It's a variant of the common trope of a woman facing invasion or military defeat killing herself to avoid becoming a prisoner of war or a spoil of war.

Another similar practice is kanshi, an act of seppuku by a retainer to protest an act by his lord, whom it would otherwise be dishonorable to challenge or contradict. A variant known as kagebara is a common dramatic device in Japanese theater. A character comes on stage, tells a lord why he sucks, and then opens his robe to reveal that he's already slit his belly (binding the wound to painfully extend his brief life) and "punished" himself for his treasonous act.

And seppuku still happens in modern Japan, although it's not as common as it once was. Japan is known to have a much more permissive attitude to suicide than other developed countries (ranking ninth in World Health Organization rankings — for comparison, the U.S. is 45th and the U.K. is 60th), and some of that can be traced to rituals like seppuku. Disgraced officials, politicians, and other authority figures might kill themselves as an apology for screwing up, albeit usually not according to ritual. Celebrities occasionally do this as well, and dedicated fans will often follow suit when this happens.

For the Wiki's purposes, seppuku covers a broad range of ritualized suicides from Japan (and East Asia in general), where a character makes a big deal about how, why, and when they kill themselves. The Western equivalent ritualised suicide tropes include Leave Behind a Pistol and Bath Suicide. In addition to the latter of those, writers in Ancient Rome described the practice of falling on one's sword

, which was also perceived as an honourable way of getting out of a hopeless situation; this is how Marcus Junius Brutus killed himself at the Battle of Philippi.

Subtrope of Self-Punishment Over Failure. Lodged Blade Removal can be present, although removing the blade is not a part of Seppuku as it's a suicide ritual.

Finally, as this is a Death Trope, beware of unmarked spoilers.

The Die is cast

The Die is cast