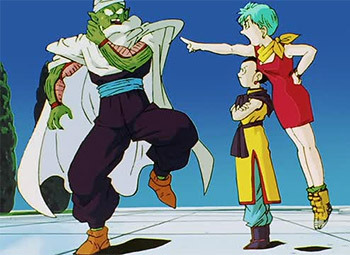 Don't train children with their mothers around.
Boss: Hey, who said you were on break?
Kitty: I did.
Boss: And who are you?
Kitty: I'm his mother.
Boss: ...that's good enough. [leaves the room]
— That '70s Show, "Eric's Burger Job"
Advertisement:

The Almighty Mom can tell off anyone. Anyone. From her own kids to army generals to an Elder Thing from Beyond, you name it. It doesn't matter if she is severely outclassed by the object of her ire in every relevant way; her iron-willed personality will pound him/her/it into submission without her needing to lift a single finger. Don't get fresh, don't talk back, and if she wants it done, chances are it'll get done.

She can reduce grown men to the level of children with only a sentence and a glare, and, guess what, she's always right. Not only can she put anyone in their place, but she knows the best way out of any situation.

A Sub-Trope of Mama Bear, and often a characteristic of the Team Mom, the Jewish Mother and the Apron Matron. Compare One Bad Mother and Never Mess with Granny for the older version. See also My Beloved Smother, which this can often seem from the embarrassed offspring's perspective.

She is Hao's mom that not only sounds and looks like Anna but is the only one who can humble him.

She is Hao's mom that not only sounds and looks like Anna but is the only one who can humble him.