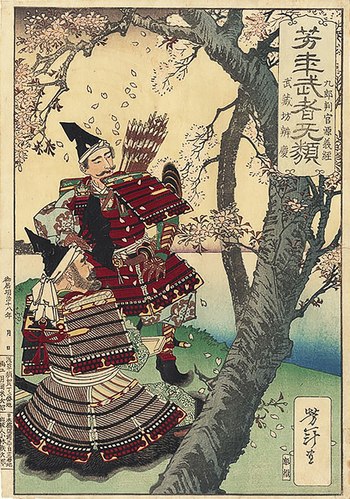 Minamoto no Yoshitsune is one of the most well known military commanders within Japan. A figure that invokes courage, Yoshitsune has participated in many battles during the Genpei War, yet it was by the tragedy of the political drama surrounding his family that Yoshitsune perished.

Born Ushiwakamaru as the youngest child of Minamoto no Yoshitomo, with his mother being Tokiwa Gozen, the Heiji Rebellion were at the onset of breaking in Japan. The rebellion claimed the lives of his father and many of his brothers, but Yoshitsune survived and fled with his mother. He was placed in the care of the monks of Kurama temple at the age of 10, but he didn't want to be a monk. Thus when a gold merchant that happened to know his father passed by, Yoshitsune took a ride. And already in young age, he displayed incredible martial prowess, singlehandedly defeating a group of bandits led by Kumasaka Chohan at the tender age of 15.

As Yoshitsune grew up, he heard about the exploits of his half brother Yoritomo. While Yoshitsune fled his home, Yoritomo was banished, but nevertheless he grew to become a famous and powerful man, reclaiming the position of the head of the Minamoto clan. Yoritomo made a call-to-arms to obey the request of Prince Morihito to defeat the Taira clan, an exploit that would be immortalized in The Tale of the Heike. Despite never meeting his brother personally, Yoshitsune answered his call to arms, along with his other half brothers that he also never met. Along the way, Yoshitsune stumbled upon a certain warrior monk Saito Musashibo Benkei and bested him in combat as opposed to getting his sword stolen for Benkei's 1000th's collected sword, and made Benkei his most loyal retainer.

Yoshitsune went on to become Yoritomo's ace samurai. Many tales about his feats in battles, from obliterating the army of betraying brother Yoshinaka in Awazu (although Yoshitsune never personally encountered Tomoe Gozen), being the headline of the Battle of Ichi-no-Tani, reportedly the greatest battle in the Genpei era or finally finishing the Taira clan in the Battle of Dan-no-Ura, where one of the most famous myth of Yoshitsune originated: Dan-no-Ura is practically a naval battle between Minamoto and Taira. Through Yoshitsune's command, he managed to get the commanding Taira commander, Noritsune to admit defeat or prepare to surrender, but instead attempted suicide. Yoshitsune, with his own feet, decided to leap through 8 boats to either escape from Noritsune's suicide because it was causing chaos that could drown his navy; or he leapt through 8 boats to make sure Noritsune didn't get the chance to commit suicide, and severed his head.

Regardless, Yoshitsune's 'eight boat leap' (originally written as 'Hassou Tobi') became one of his biggest feats, historically accurate or not. But after the war with the Taira, everything just went to hell for Yoshitsune.

For his services, Emperor Go-Shirakawa granted Yoshitsune several titles such as the Governor of Iyo. And for some reason, Yoritomo didn't like how much attention Yoshitsune got and proceeded to nullify all those titles, despite Yoshitsune's ever strong loyalty. Yoritomo began to grow more megalomaniacal that Yoshitsune eventually agreed to ally with his uncle Yukiie to stop him. But Yoritomo's forces was too many, that Yoshitsune had to flee and was tragically separated with his faithful mistress Shizuka who carried his unborn child.

Yoshitsune took shelter in the Fujiwara region, specifically within the home of Fujiwara no Hidehira. Hidehira protected him well, but his son Yasuhira, pressured with the might of Yoritomo's forces, ended up selling out Yoshitsune to Yoritomo. Surrounded with no hope of victory, Yoshitsune was forced to commit Seppuku while Benkei made sure his Seppuku went undisturbed, including his mighty Last Stand against Yoritomo's forces culminating him dying while standing up, with Hidehira eventually beheading the dead Yoshitsune and then giving his head to Yoritomo as proof of the death of his brother.

There were other rumors that Yoshitsune didn't actually die, but fled somewhere else and took another identity either to Hokkaido becoming Oinakamui or to mainland Asia becoming Genghis Khan. Tales of Yoshitsune's bravery and tragic end continued to permeate the stories of Japan, turning Yoshitsune into one of the nation's most famous and romanticized Samurai.

Appears in these works: