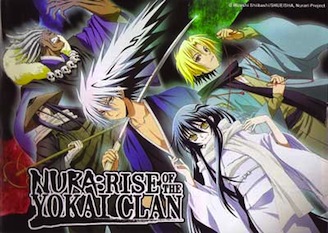 In the days of old, people feared yokai. The one who stood at the helm and ruled the Night Parade of One Hundred Demons, was known as the Supreme Commander of the yokai. They had another name for him… the Lord of Pandemonium… Nurarihyon.
Advertisement:

Nura: Rise of the Yokai Clan or Nurarihyon no Mago ("Grandson of Nurarihyon") as it is called in Japan is a manga series by Hiroshi Shiibashi, about a boy named Rikuo Nura who is one-quarter youkai. Rikuo is constantly pressured into taking over the Nura youkai clan by his grandfather, the Nurarihyon, but he strongly disapproves of what the clan does, so he refuses. At night, Rikuo has to ability to transform into a full youkai, and a very powerful one at that, though he does not retain any memories of when he transforms.

At first, the series is an Monster of the Week series dealing with the boy trying to live a normal life, and keeping the truth about himself and his family from getting out to his normal school friends.

His friends include Kana Ienaga, his Childhood Friend who is afraid of youkai, and Kiyotsugu, the class president who is a wannabe demonologist and major fanboy of Rikuo's youkai side. He often has to handle threats to his friends and school, and deal with occasional assassination attempts by yokai who want to take over his clan. The cast is rounded out by the yokai retainers who live in his family's mansion and his own personal bodyguards. Most of the youkai characters are based on actual mythological youkai.

The 24-episode first season of the anime (covering the Shikoku arc) first aired in 2010 and is available to watch on Hulu under the English title Nura: Rise of the Yokai Clan

if you live in the US. A second season, covering the Kyoto arc, ran during the Summer 2011 Anime Season. A two episode OVA set a few hundred years before the series has also been made.