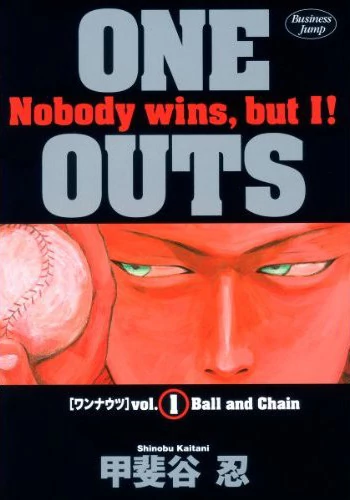 A manga by Shinobu Kaitani (also the author of Liar Game) One Outs presents itself quite differently from others in its genre. While most sports series are focused on the importance of training, determination and teamwork (more often than not featuring high-school-age players), One Outs is mainly concerned with loads of money and incredible mind games in a pro baseball setting.
Advertisement:

Batter Kojima Hiromichi, nearing retirement, is determined to lead his baseball team, the Lycaons, out of the bottom rank of the league. After a trip to a training camp in Okinawa, he stumbles upon a game of "One Outs" - a gambling variant of baseball - where he is defeated by pitcher Tokuchi Toua, who is claimed to have never been beaten. Realizing the missing factor of his team, he makes another wager with Tokuchi, winning and recruiting the latter into the Lycaons.

The manga was serialized in Business Jump from 1998 to 2006, and compiled into 20 volumes. It was adapted into a 25-episode anime series by Madhouse in 2008. The anime was produced by the team responsible for Akagi and Kaiji; the protagonist is voiced by the seiyuu of the eponymous characters from those two series.