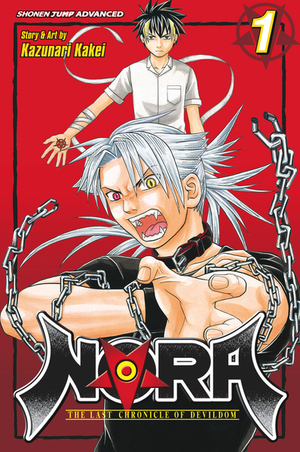 Nora: The Last Chronicle of Devildom is a shounen manga that was serialized in Weekly Shonen Jump from March 2004 to December 2006. Published in North America under Viz Media's Shonen Jump Advanced label, the entire nine-volume series has been released in English. The anime and sequel manga Nora the Second have yet to be licensed.

Nora is a Cerberus, a rare and powerful breed of hellhound, in the service of the Dark Liege Army. On the battlefield he's a force to be reckoned with. Off it, however, his attitude is... less than stellar. Tired of his rudeness and impulsiveness, the Dark Liege herself seals him in semi-human form and sends him to the human world, both to counter La Résistance and to get some obedience training.

The designated Kid with the Leash of this tale is Magari Kazuma, a phlegmatic boy who claims to live his life by 'a strict Cost-Benefit analysis'. Initially he only agrees to fight and ratifies his 'familiar spirit' contract with Nora out of boredom, but when he discovers that one of the main bones of contention between the Dark Liege Army and the rebels is the "right" of demons to hunt and devour humans for fun, it's on.