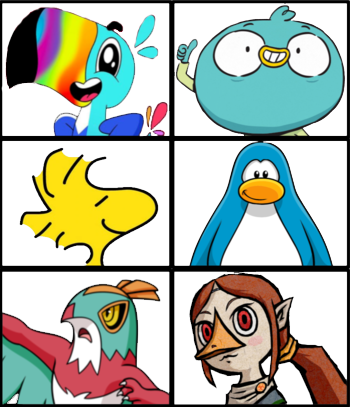 Just beak-cause!L - R, top to bottom Toucan Sam, Harvey Beaks, Woodstock, a Club Penguin penguin, Hawlucha, and Medli
The beak is one of the main defining parts of a bird, possibly even more than the wings or feathers. While Real Life birds can't move their beaks to make facial expressions, cartoon birds can often move their beaks like mouths as per Rule of Funny.
Advertisement:

This can come in several different forms. A bird's beak may act like a nose, with a human-like mouth underneath, or their beak may be flat against the face and be moveable like a mouth. A less extreme case involves a small or nonexistent lower beak which the bird can use to express while still keeping the effect of a realistic beak.

Often results in Informed Species, or in worse cases, Uncanny Valley. Subtrope of Funny Animal Anatomy and Artistic License – Ornithology. See also Feather Fingers and Toothy Bird for more common tropes involving anthropomorphic avians, Clamshells as Mouths for the bivalvian equivalent, Aardvark Trunks for the anteating equivalent, and Crying Critters for another instance of animals emoting in a way that breaks biology. Compare Expressive Skull and Expressive Mask for other faces that shouldn't emote but do. Not to be confused with the other definition of "mouthy", in that case see Polly Wants a Microphone for talkative birds.