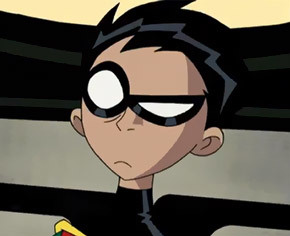 Robin must've swapped his usual mask for his custom "eyebrow raised" mask faster than 1/24th of a second.
"The turtles wear rubber masks as a disguise. But why do the mouths move? Those are some expressive masks."
— James Rolfe, Top 20 Turtle Flubs
Advertisement:

A character's mask is usually intended to obscure the face. In animation this used to also be a helpful cheat to draw something similar.

In order to look less wooden it is very common for the mask to become a character's face. The eyeholes and even the shape of the mask will contort seamlessly depending on the character's mood. At the very least the mask will move as if painted on. This is especially true when a character's eyes are not drawn while in costume.

This can even extend to eyeglasses (especially Eye Glasses) and similar accessories. The lenses of an expressive character become organic extensions of the body: widening with surprise, narrowing with suspicion, and scaring with shiny. Interestingly cracked glasses can autorepair thanks to this property between scenes. This is similar to Open the Iris, where the iris, not the pupil, widens and shrinks.

Even if the mask, helmet, or head itself isn't very expressive, you can still get a lot of mileage out of Disembodied Eyebrows. For other emotion-conveying clothing see Expressive Shirt. If a character has a similarly animated skull for a head, then it is an Expressive Skull. For a mask that perfectly replicates the face it's modeled on, down to expressions and emotions, see Latex Perfection.

Amazing for a mask that's much larger than the wearer's head, isn't it?

Amazing for a mask that's much larger than the wearer's head, isn't it?