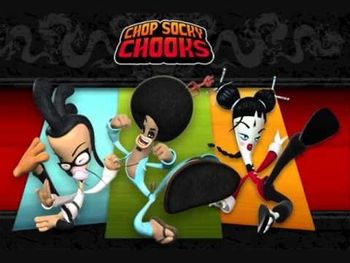 Chop Socky Chooks was a short-lived British-Canadian All-CGI Cartoon produced by Aardman Animations and Decode Entertainment (now part of WildBrain). A spoof of martial arts movies, the series aired on Teletoon and Cartoon Network from March to September of 2008, running for a total of 26 episodes. over a single season

The show focused on three martial artists named Chick P., K.O. Joe, and Chuckie Chan, who all live and work in a city-sized shopping mall called Wasabi World, which is owned by an evil little piranha named Dr. Wasabi. The trio protect the citizens of Wasabi World from Dr. Wasabi's various machinations, which usually involves have to use their kung fu skills to battle Dr. Wasabi's ninja chimps and his massive but dimwitted gorilla henchman Bubba.

...Oh, and did we mention our heroes are fighting chickens?

Yeah, this was an odd little show. And if you're wondering about the name, "chop socky" is a slang term used by film buffs for schlocky, low-budget Hong Kong martial arts movies made between the 60s and the 80s (aka the kinds of movies the show is inspired by), while "chook", which is a little-known Australian/New Zealander word for "chicken" (which the characters are highly stylized CGI-cartoon versions of). Basically, it's a weird way of saying "kung-fu chickens".

Incidentally, this was actually Aardman's second co-production with Decode, having previously created Planet Sketch with them. Aardman would later add a third show to their slate of co-productions with Canada in the form of Counterfeit Cat, although this one was done with Atomic Cartoons. Both shows, incidentally, also aired on Teletoon in Canada.

Example of:
Who Even Needs a Brain?