The Knights Who Say "Squee!" 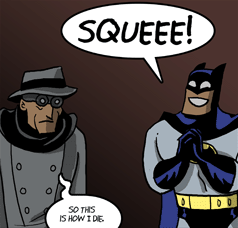 Even the Goddamn Batman can be a fanboy.
Negi: You certainly seem very happy, Tosaka. I've never seen you like this before.
Tosaka: [holding an autographed picture of Jack Rakan] Damn right I am! What are you, stupid? To gladiators like me he's a freakin' god, you know?! Like a goddamn deity walking the earth!
— Negima! Magister Negi Magi, Ch. 256
Advertisement:

Simply put, even heroes will have their heroes.

Maybe you think that answering The Call and becoming a hero may put our dear protagonists in a more elevated and level-headed position and that they should not feel the need to admire anyone. Now they have the power and the nice toys and even some fans of their own.

However, what we forget is that our dear protagonists used to have a life before (or even besides) their duties, and are still individual people with likings and all. Maybe they Jumped at the Call because they wanted to be like their beloved childhood hero, or had some of their decisions shaped by the "philosophy of life" of their idol. The person they admire and want to follow didn't have to be a "true" superhero, though. Could be a favorite celebrity, Idol Singer, or something else. They can also be a real person. Maybe that doesn't even have to be a person; just an object, an animal (small cute creatures are a particular favorite), a show, even a particular attitude.

So, why we should be surprised that they still Squee over their idols? Given the circumstances, we should not be surprised whenever a Superhero, Magical Girl, Teen Superspy, etc. starts acting like a fanboy/fangirl over something or someone.

Often, this is followed by Fan Disillusionment when the Hero discovers the Squee object is actually either mean, fake, or not without his own problems. This can lead to an anvilicious Aesop on not becoming a fanboy/fangirl; conversely, it can lead to An Aesop that the hero is, after all, a human being.

Another common plot is for the best current hero to squee and be all "I'm Your Biggest Fan!" over a childhood idol, perhaps telling him that he was the inspiration that got him where he is. The hero's fans are often quite embarrassed by the way they treated what they assumed was an insignificant elderly person.

Compare Audience Surrogate, Fan of Underdog, Like a God to Me, Ascended Fanboy, Promoted Fanboy, Hero-Worshipper. If this happens with a regular person, it's Starstruck Speechless.

Not to be confused with The Knights Who Say Ni, although the title is derived from there.

Alternative Title(s): Even Heroes Have Heroes