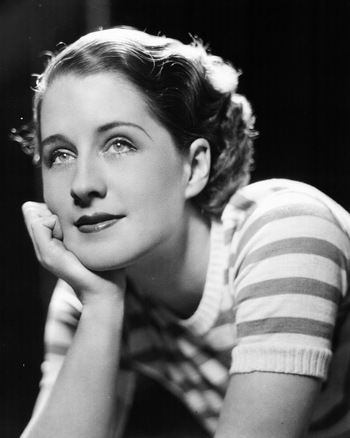 "...being a fan is hard, darling."
— Norma Shearer, at the Hollywood premiere of Grand Hotel (has become somewhat of a Memetic Mutation and her most-recognized quote)
Advertisement:

Edith Norma Shearer (August 11, 1902 note Some sources give her birthdate as August 10, but they are incorrect, because of the discovery of her birth certificate

◊ – June 12, 1983) was a Canadian-American actress who was a notable figure in Hollywood's silent, pre-Code, and early Golden Age eras.

Born and raised in Montreal, Shearer moved to New York City with her family in 1920, starting her career as a model and making brief appearances in silent B-movies. She moved to Hollywood three years later after being offered a contract for MGM, named Louis B. Mayer Pictures at the time, and soon became one of the most popular and sought-after actresses in Hollywood by 1925. (The fact that she was married to Irving Thalberg, the studio's head of production, didn't hurt.). When sound films were becoming popular, Shearer was reluctant to end her silent film career; however, her appearance in The Trial of Mary Dugan in 1929 won over critics and audiences, who liked her Canadian accent.

In the time prior to The Hays Code, Shearer portrayed racy and scandalous women in films like The Divorcee and A Free Soul, which destroyed her "good girl" image that prior roles had type-casted her as. She was nominated for an Academy Award six times and won once in 1930 for Best Actress in The Divorcee. However, she appeared in biopics as historical figures, such as Marie Antoinette, feature in all-star ensembles like The Women in 1939, and appeared as Juliet in a 1936 adaptation of Romeo and Juliet, and she was praised for her versatility.

She's also the reason the Academy Awards for acting are typically presented by the previous year's winner of the opposite gender; for the second and third years they were simply presented by the previous winner in the same category, but then Shearer won in 1929 and was then nominated again in 1930,note not for any specific performance, as at the time the award was for all their work in the previous year making clear the flaw of potentially putting the presenter in the embarrassing position of announcing themselves as the winner.

Following Thalberg's death in 1936, Shearer had brief affairs with Jimmy Stewart and George Raft. (Raft, who was married but long-separated, wanted to marry her but his wife refused to divorce him.) She retired from acting in 1942, after which she remarried (to a ski instructor 11 years her junior) and gradually retreated from public life. However, she enjoyed a resurgence of popularity when her movies appeared on television starting in the 1950s. She died of pneumonia at the age of 80.

Tropes that applied to her characters: