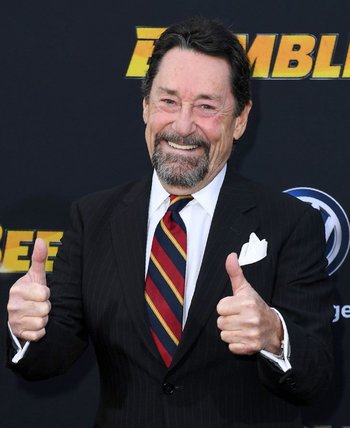 "Freedom is the right of all sentient beings. No sacrifice is too great in the service of freedom. One shall stand, one shall fall. Autobots, transform and roll out!"
"Love that guy. Goosebumps every time."
Advertisement:

He IS Optimus Prime.

Peter Claver Cullen (born July 28, 1941 in Montreal, Quebec) is a Canadian voice actor best known as the voice of Optimus Prime in the original Generation 1 incarnation of The Transformers. Cullen might have just been the first of many voice actors to lend their vocals to the Autobot leader, until 2007 when the live-action film series began and he returned to voice Optimus in all five films as well as the Bumblebee spin-off, and the upcoming Rise of the Beasts film for 2022. So celebrated was the news that he was the former Trope Namer for And the Fandom Rejoiced, under the name "Cue Cullen".

Before he ended up filling Prime's tire tracks, Cullen did prolific voice work through the 60s, 70s and 80s. He has narrated and played Coran (Raible in the original) and King Alfor (King Raimon) in the Lion Voltron (GoLion) series, the transforming spaceship/robot Ramrod (Bismarck in the original) in the 1980s anime series Saber Rider and the Star Sheriffs (Sei Juushi Bismarcknote Literally, "Star Musketeer Bismarck"), Commander James Hawkins in the Vehicle Voltron (Dairugger XV) series, Eeyore in Winnie-the-Pooh, Venger in Dungeons & Dragons (1983), the narrator, Murky Dismal, and Skydancer in Rainbow Brite, Eddie Spenser in Filmation's Ghostbusters, the Predator in the original film, King Kong in the 1976 remake, and KARR in Knight Rider.

Cullen also holds the distinction of being the first voice actor for Mario in any language (in the Donkey Kong segments from Saturday Supercade),note however, the first live-action portrayal of Mario was Harris Shore in a commercial

for Donkey Kong home conversions shot in 1981, predating him. For many years he provided voice-overs for Toonami's promos (as "the big guy"). Cullen's roars for King Kong were also repurposed for the character of Bowser in all Mario games between Super Mario 64 and New Super Mario Bros. (along with a series of synthesized roars, snarls, and laughs), thus unintentionally giving him two voice credits for the Mario series. Cullen also voiced Monterey Jack on Chip 'n Dale: Rescue Rangers for the first season, but was replaced by Jim Cummings for the rest of the series (Cummings had already voiced Monterey Jack in the five-part pilot movie "To The Rescue").

No relation to Bill Cullen, or that sparkly vampire dude. Also, not to be confused with Peter Mullan.

Transformers also wasn't his first collaboration with Frank Welker. His earliest animation role was as Mighty Man in Ruby-Spears' "Mighty Man and Yukk" segments on The Plastic Man Comedy Adventure Show, with Frank as Yukk. He later voiced Sourpuss the family cat opposite Frank's Chomp-Chomp the family dog in Hanna-Barbera's Pac-Man series.

I am Peter Cullen, and I send these tropes to any surviving tropers out there among the stars

"Based on the immortal poems of T. S. Eliot."