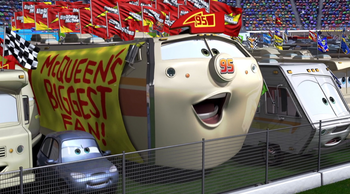 You could say he's his biggest van!
"I know you hear this from, like everyone, but I'm your number one fan!"
— Rose, Alan Wake
Advertisement:

Stock gush over a major celebrity. If this is said by a minor character, expect them to become a Loony Fan (or Ascended Fanboy), though often it's a main character squeeing over someone else. "Number One Fan" is another common term.

Sometimes linked to a visual gag where the person saying it is unusually tall or tiny.

See also Ascended Fanboy and Straw Fan. If taken too far, it turns into an Abhorrent Admirer, or even worse, a Stalker with a Crush. When it's the hero, it is often said to an old, retired character — which can be a great shock to his own fans, who assumed that old man had to be insignificant.