Virgin in a White Dress 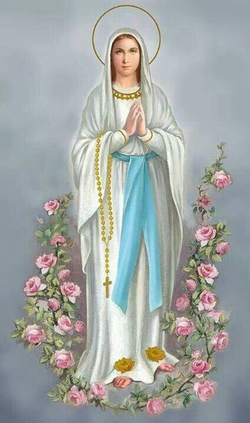 In Abrahamic cultures (Jewish, Christian, and Muslim), white symbolizes purity, thus the classic virgin wears a dress that's as pure as she is. In older times and still today in some cultures, any unmarried woman was supposedly expected to remain chaste, so she could be identified by the color she was wearing. (But see the Real Life section below.) This color-coding is traditional for a bride on her wedding day, a débutante at her coming-out party, and the Virgin Sacrifice. The Ingenue might very well wear white for the virginal symbolism, while an Ethical Slut might do so for irony, or to emphasize the "ethical" aspect. The idea might be present even in a modern setting because of characters being notably religious, or a sense of Old-School Chivalry being restored.

A Fairytale Wedding Dress will be pure white unless it has a little bit of pink or something as girly to it. The girliness can be done away with, though, for a bride who wants to convey a sense of purity but also emotional maturity or a widow who is married a second time; all such a woman needs is a dress that's simple, understated, and still strikingly beautiful — and white.

May overlap with Ethereal White Dress if the character died innocent or at a young age.

Examples can range from the saint-like to a sexually inexperienced woman who wanted to "lose it", to an experienced one who has somehow renewed her sense of purity. Very commonly associated with goddesses and other über female character types.

This is of course the basis of the Blood-Splattered Wedding Dress trope.

Compare Gold and White Are Divine and True Blue Femininity.