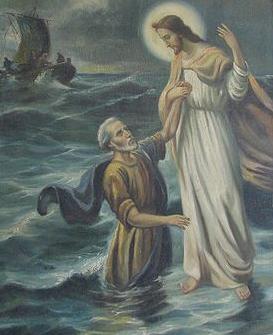 "I have to pay the ferry, to cross the Galilee
but not my brother (no not him) he walks across for free."
— The Arrogant Worms, "Jesus' Brother Bob"
Advertisement:

I Have the High Ground, with a body of water and the ability to stand on a liquid as if it were solid ground substituted for the slender pole. This may occasionally have a tactical use, but it is usually much more about looking cool.

A common variant is the ability to only run across water (frequently by Super Speed characters such as The Flash), which is just as cool, and somewhat more scientifically plausible — high speed is what enables thrown rocks to skip across water and jet-ski boats to (no pun intended) run; in these cases, losing speed or coming to a stop will result in the character sinking, requiring them to swim.note In case you're wondering, estimates for how quickly you'll need to run range from 20 to 30 metres per second, or 2 to 3 times the speed of Usain Bolt. Characters with flight might achieve a similar effect by hovering just about the surface, and those characters who like Making a Splash might use water powers instead.

The most well-known water-walker is probably Jesus Christ in the Gospels, who casually walked out over a raging sea (a feat few other water-walkers have ever matched — Jesus Was Way Cool indeed) to meet his disciples' boat. Disciple Peter followed suit, but his lack of faith caused him to sink beneath the water and he had to be saved by his master. Despite its Biblical origin, the trope is usually executed without an especially strong Faux Symbolism feel to it, as the primary objective is, once again, about looking cool. This doesn't stop the occasional Baptist-Fundamentalist Media Watchdog from complaining about people other than Jesus being depicted as doing such a thing, despite Peter walking on the water to Jesus almost immediately after seeing him.

Not to Be Confused with the 2004 Israeli movie of the same title. Compare with Walk, Don't Swim, which is about walking under water. Don't confuse with Waltz on Water, which is the tendency for video game water levels to have waltz music.

Brook demonstrates his ablity to run on water.

Brook demonstrates his ablity to run on water.