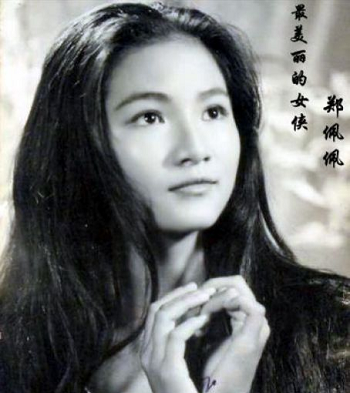 Born in Shanghai in 1946, Cheng relocated to Hong Kong when she was 14. Armed with a high school education and six years of ballet training, Cheng joined the Shaw Brothers' performing arts training course, which served as a springboard for her into a career as an actress with Shaw Brothers.

She made her film debut playing a male in The Lotus Lamp in 1963, but quickly made her screen presence felt when she starred in Pan Lei's Lover's Rock later that year.

During her years at Shaw Brothers, she made over 20 movies of which most were Wuxia films. Cool but passionate, poised but lethal, Cheng carved herself an unbreachable niche as the "Queen of Swords" in classics such as Come Drink With Me (1966), Golden Swallow (1968), Dragon Swamp (1969), and The Lady Hermit (1971).

Cheng also showed that she was not just a swashbuckler. With her dancing background, she proved to be a natural in musicals such as Hong Kong Nocturne (1966) as well.

She left her successful career and moved to the U.S. to get married in 1971 after making The Lady Hermit in 1971, but she returned to Hong Kong in 1973 to make two movies for Golden Harvest. She divorced her husband in 1987; they had a total of 3 daughters and a son (Harry Yuan He-yu; you might have seen him hosting a National Geographic Channel show or two...)note Her marriage was also linked to Shaw Brothers: her father-in-law was Shaw's Taiwan agent at the time, and fellow Shaw actor Paul Chang Chung played matchmaker.

She returned to Hong Kong for good in 1992, working in television, until Taiwanese auteur Ang Lee cast her as the Jade Fox in the Oscar-winning Crouching Tiger, Hidden Dragon. The film brought her the best supporting actress award in the Hong Kong Film Awards and took her career to new international heights.

She wrote her own autobiography, published in 2017.