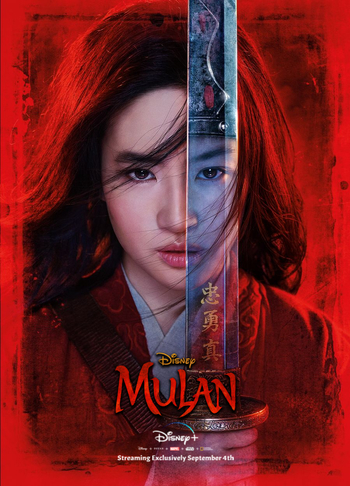 Loyal, Brave, True. note Yes, those are what the words on the sword mean.
"Do you know why the phoenix sits on the right hand of the Emperor? She is his guardian. His protector. She is both beautiful and strong. Your job is to bring honor to the family. Do you think you can do that?"
— Hua Zhou
Advertisement:

Mulan is an American war action drama film directed by Niki Caro and produced by Walt Disney Pictures. It is a live-action remake of Disney's 1998 animated film of the same name, itself based on the Chinese ballad of Hua Mulan.

When the Emperor of China (Jet Li) issues a decree that one man per family must serve in the Imperial Army to defend the country from Northern invaders attacking China, Hua Mulan (Liu Yifei), the eldest daughter of an honored warrior, steps in to take the place of her ailing father. She is spirited, determined, and quick on her feet. Masquerading as a man, Hua Jun, is tested every step of the way and must harness her inner strength and embrace her true potential.

The film had a world premiere at the Dolby Theatre in Los Angeles on March 9th, 2020. It was originally scheduled for wide release in the United States on March 27, 2020, but due to the COVID-19 Pandemic, it was postponed several times. The film would ultimately be released on September 4 through the then-experimental Disney+ with Premier Access model, while receiving a more traditional theatrical rollout in areas where theaters were open.note While Disney would continue to utilize the Premier Access model through much of 2021, later films would be released in theaters alongside the streaming platform. A month after its Disney+ debut, it also received a release on more traditional VOD platforms.

"I’m Hua Mulan. I will bring honor to us all."
Feedback

Mulan's family's phoenix spreads its wings behind her as she steels herself to fight Bori Khan.

Mulan's family's phoenix spreads its wings behind her as she steels herself to fight Bori Khan.