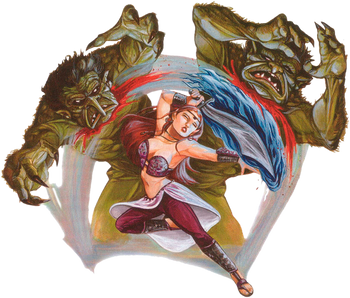 Off, off with your head
Dance, dance til you're dead
"They're breakdance-fighting!"
— Mugatu, Zoolander
Advertisement:

So, you've found yourself in an altercation. You're facing down your opponent. Suddenly, they start moving about in subtle dancing motions as they wait for you to come at them. You assume them to be styling on you and you start swinging at them with your most precise hits, but none of them connect while your opponent continues to sway gracefully. You step back for a moment to predict where they're going to go next and what they're going to do. You aim straight for them as they start spinning and then BAM!!

Your opponent takes a bow before departing, but you don't get to see it because you're face down on the floor. You been hit by... you been hit by, a dance battler!

While this might seem strange, it really isn't all that far-fetched. Being a good dancer requires flexibility, coordination, balance, reflexes, and sometimes strength and speed, all things that go a long way in a fight as well. Plus, it just looks cool.

There are several ways to go about this:

Dance Battlers are often unarmed. Adding a weapon will make them even more deadly because these kinds of fighters tend to favor knives or small arms that can be twirled with gymnastic flair. If they can Spin to Deflect Stuff, all the better. Either way, a Dance Battler is an annoying opponent, since it's hard to tell what's an attack and what's just a fancy step.

A telltale sign you're fighting someone like this in a Fighting Game is that they're always sweeping one foot and then the other behind themselves.

A reasonable skill to teach someone in the Wax On, Wax Off method. Gives a whole new meaning to "Dance Sensation". If the dancer is popular and/or given special treatment for their talents, they're Dancing Royalty. If female, the Dance Battler is likely to be a Lady of War because of their graceful movements in battle. If the Dance Battler can Summon Backup Dancers, be very worried. This trope often goes hand-in-hand with Confusion Fu.

Compare She-Fu, which can be combined with the Dance Battler style. Compare & contrast Musical Assassin, Magic Dance, and Graceful in Their Element. See also Let's Dance, which is usually not meant literally, but can be.

Not to be confused with Dance-Off, when people duel just by dancing without any combat.

That is not to say that all traditional dancers can fight. Very often the dance traditions use larger, more flamboyant and expressive movements designed for visual appeal. And it does not mean all martial artists can dance, either. But there is a degree of overlap, especially in traditional cultures. Many of the attributes that make a good dancer — strength, endurance, grace, balance, rhythm, timing, physical presence — are also found in warriors.

To further complicate matters, many martial arts have an explicit dance component. "War dances" all over the world incorporate movements and emotional content from their combative tradition. The purpose may be to create group identity, impress the opposite sex, entertain, compete non-violently for status or frighten enemies. In some traditions, combatants show their form by shadowboxing, often to music. A vastly inferior opponent can step down without losing face or risking injury at this point. Or participants may show a false weakness to the surprise of the opponent when they fight. Or at least it gives the audience a chance to lay down bets.

Anne and Sasha utilize their Super Dance Fusion routine in their fight against the mind-controlled Olivia and Yunan.

Anne and Sasha utilize their Super Dance Fusion routine in their fight against the mind-controlled Olivia and Yunan.