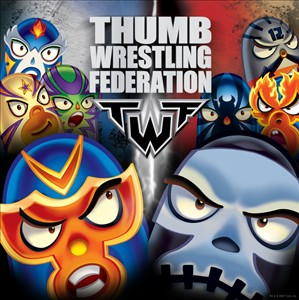 The Thumb Wrestling Federation is a Show Within The Commercials that frames Cartoon Network's Saturday morning programming block, with a match at the halfway point of the block. It is a parody of Professional Wrestling featuring two rival teams, the Sinistras and the Mighty Dexteras, with play-by-play by Dick Thompson and color commentary by retired thumb wrestler Colonel Cossack. Other behind-the-scenes shorts run between the other shows, though Dick and the Colonel are the only characters to appear in the mid-show Ad Bumpers. Produced by Animation Collective.