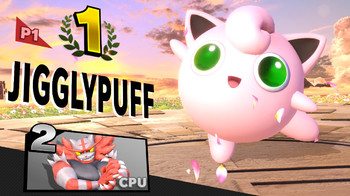 A mountain of pure muscle defeated by... a singing balloon?
"His buffs and updates to his moves in the more recent games have actually allowed Dan to become a legitimate choice in the tournament setting, to the point that players say that Dan's greatest strength is the illusion that he's supposed to be bad."
— The Street Fighter Wiki on Dan Hibiki

You've just unlocked an absolutely useless Joke Character. Weak attack, laughable specials, etc. And yet, your buddy next door uses them every time... and always kicks your ass.

Are they Cherry Tapping? Nope; the last time you won was when you put it on "random." They’ve discovered how to use the Lethal Joke Character.

The designers, looking for balance, have sneaked in one obscure, impossible-to-master, but incredibly rewarding technique for this character, and using it, you'll win every time... if you can get it down. But doing so requires skill, practice, and the ability to see the potential in the seemingly-useless. It's a sort of Obfuscating Stupidity applied to the game mechanics.

Quirky Bard is a subtrope found in many role-playing games. Compare Elite Tweak, an in-game feature which takes a capable character and turns them into a wrecking monster. Difficult, but Awesome refers to characters whose potential is more obvious, but requires more effort to utilize. Unlike a Magikarp Power, the Lethal Joke Character always had this ability to kick ass; it just requires a lot of skill to use them. See Lethal Joke Item for useless inventory and skills that eventually become overpowered. Heart Is an Awesome Power is the non-gameplay version.

Not to be confused with Fighting Clown, which is a silly character whose strength is readily-apparent (whereas here it isn't), or Mechanically Unusual Fighter / Mechanically Unusual Class, who/which is intended to be a viable option without resorting to an obscure tactic.

As with Joke Character, this is a Game Trope. For non-game examples, see This Looks Like a Job for Aquaman, Crouching Moron, Hidden Badass or Beware the Silly Ones.

Diotoir is well known for catching on fire in almost every fight it's been in, however in this Series 5 fight, it defeats Tornado, a future Robot Wars champion.

Diotoir is well known for catching on fire in almost every fight it's been in, however in this Series 5 fight, it defeats Tornado, a future Robot Wars champion.