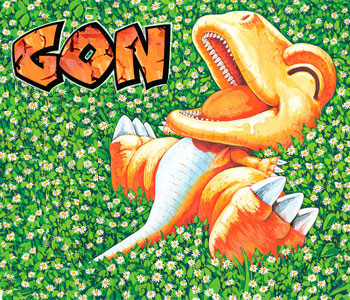 Gon is a manga written and illustrated by Masashi Tanaka, which was serialized in Weekly Morning from 1991 to 2002.

The main character, Gon, is a diminutive Tyrannosaurus rex who was forgotten by time. Unlike certain other creatures, Gon is a Silent Protagonist. In fact, despite there being no humans whatsoever, and a notable amount of communication occurring in every story, there is absolutely no dialogue whatsoever, by any of the animal characters.

Gon is also a stalwart Determinator, who can be sent crashing through a tree with no harm done — to him. Whatever just attacked, though, won't end up unscathed.

For some reason, he appeared as a hidden character in Tekken 3. We're still not sure what to make of that, besides the fact that he's utterly Game Breaking (despite being considerably weaker than in the manga).

premiered on TV Tokyo on April 2, 2012. A kid-friendly video game and a manga aimed at a younger age set will accompany this new series. To the surprise of many, the CGI series was also picked by Netflix recently and it was given an English dub to go with it. Fans of the old school Gon aren't completely left out, thankfully: as the original manga is set to continue in March in the seinen magazine Kodansha Afternoon.