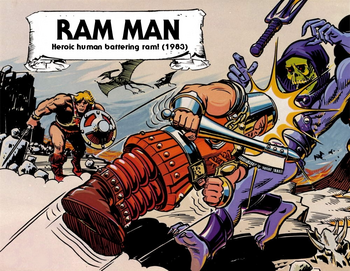 Ram-Man used Headbutt! It's super effective!
"Oh, I haven't got the brains for argument, but I don't need them as long as my head is harder than his viscera!"
— Cindy Lou, Kiss the Boys Good-Bye
Advertisement:

It has been shown time and again, in cartoons, movies, and video games, that the best way to break something is by hitting it with your head. Really hard.

We're not talking ordinary, run-of-the-mill headbutts here. Heck, we're not even talking about headbutts of love. When a character uses his head, they transform from ordinary bloke to full-on Battering Ram. The character may go into full on raging-bull mode, charging blindly ahead at whatever stands in his path. Or his companions may actually pick him up, using the blunt end of his skull to smash down whatever it is that needs smashin'. This can be an effective means of attack for some. For others, it's simply the easiest road to destruction. When somebody breaks out the cranial cannonball, the walls are going to come tumblin' down, 'cuz Ramming Always Works.

Strangely enough, a character who employs this technique never seems to get a concussion, or even a headache. This may be because he's a Big Guy or a Cloudcuckoolander — two character subspecies known for this trope — and for having very thick skulls, or maybe he's wearing Weaponized Headgear. (Genius Bruisers are, of course, an exception.)

Although the Trope Naming phrase doesn't always precede incidences of this trope, if you utter it in the presence of the Big Guy or a Cloudcuckoolander in battle, you know exactly what you're likely to get.

Also see Headdesk, which is Using Your Head out of frustration, or Put Their Heads Together, when two characters get hit with each other's skulls. Compare Ass Kicks You. A signature move of the Violent Glaswegian, where it is called the "Glasgow Kiss". Headbutting Pachy is another related trope, drawing attention to a dinosaur with a reputation for doing this.

As Ram-Man himself said in one cartoon, Don't Try This at Home.