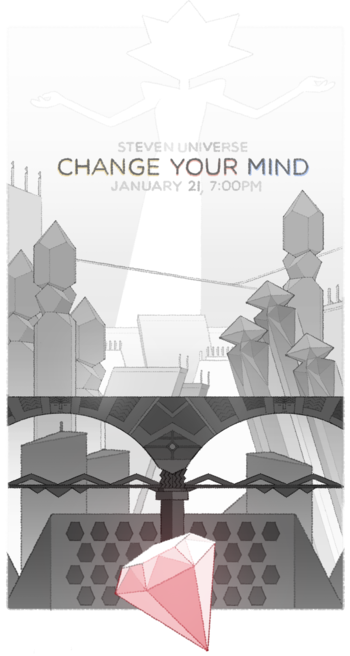 Steven, Connie and the Gems attempt to change the way the Diamonds see Steven, other Gems, and themselves.

Full Recap
In the tower, Steven has a dream of Pink Diamond, locked up there and visited by Blue, who chastises her for releasing organic creatures at a ball. Shortly after he wakes up, he and Connie get a visit from Blue, who won't let them out unless Steven apologizes for making a scene at the ball by fusing. Noting how similar her entrance was to his dream, Steven gets her to realize that she had made Pink cry so many times it had become routine, and it finally dawns on her just why Pink wanted to leave Homeworld so long ago in the first place. She agrees to help Steven and Connie, and smuggles them to Pink's chambers. Steven and Connie promptly pig out on the food they brought with them, and Steven changes back into his normal clothing.

Blue takes Steven and Connie to Yellow's bubble room, where the Crystal Gems' gemstones have been placed, only to find Yellow herself waiting for them, who wants to know what Blue thinks she's doing. When Blue points out that they both hurt Pink, which is what led to her rebellion in the first place, and that Steven would be better off away from Homeworld, Yellow reacts violently, and the two Diamonds get into a fight that quickly goes outside. Eventually, Steven and Blue manage to get through to Yellow about how the way she treated Pink was wrong, leading her to start crying—without any of Blue's influence. As Steven reclaims his family's gems, Yellow and Blue agree to help Steven and Connie escape from Homeworld, hopefully before White finds out.

However, they're too late when they're accosted by White Pearl outside of Pink's leg ship, and White's torso ship lifts off and lands atop the legs, taking control. Just then, though, Blue and Yellow's arm ships unexpectedly arrive and begin attacking White's ship, to the two Diamonds' confusion as they're definitely not controlling them. After White and Pink's ships are knocked over, the arms land to disgorge Bismuth from one, and the reformed Lapis and Peridot from the other. Bismuth is pleased that she got to "uppercut an upper crust" for once, and she gives Connie the new sword she made her.

Steven gets Yellow and Blue to take control of their ships to try and force White to listen, eventually bringing everyone onto the hands of the combined Diamond mecha. However, when Yellow and Blue voice their concerns about living up to White's perfect standards and Steven asks her to help, White responds by blasting Yellow and Blue with beams from the eyes of her ship that turn the two monochrome, just like White Pearl, before bubbling them into the ship. As the poofed Crystal Gems' gemstones fall and Steven goes after them, Lapis, carrying Bismuth and Peridot on a trash can lid with Connie hanging below, fly around to try and distract the Diamond mecha.

Steven manages to catch Amethyst's gem first, and, trying to get her to reform so they can save the others, fuses with her into Smoky Quartz. The Fusion is confused initially, before congratulating Steven on discovering that he can get the others to reform via fusion. Steven and Amethyst defuse, and Amethyst tells Steven she'll be fine as she shapeshifts into an owl, telling him to go catch the others. He grabs Pearl's gem next, and fuses with her into a bombastic fusion who immediately announces himself as Rainbow 2.0. Upon noticing the plummeting gemstones of Ruby and Sapphire, Rainbow flies down on his umbrella to grab them, before landing. Steven and Pearl defuse, and Pearl is complemented by Amethyst on her new jacket before she realizes that she and Steven fused, giving him a hug. Steven then turns his attention to Garnet.

As Lapis, Bismuth, Peridot and Connie join them, Steven fuses with Garnet just in time to save everyone from being crushed as White attempts to stomp on them with the Diamond mecha. The fusion, Sunstone, reassures everyone that she has this, and begins to climb up the Diamond mecha. However, she's not big enough to do it quickly, and falls off, causing Steven and Garnet to defuse. Steven declares that an even bigger fusion is needed, and Garnet agrees, announcing that all four main Crystal Gems will have to form Obsidian.

The act of fusing knocks Connie off her feet as she, Bismuth, Peridot and Lapis have to back away, and upon forming, Obsidian roars and begins to climb the Diamond mecha. The others take to the air as well to try and distract White Diamond, but Connie falls and is caught by Obsidian. Peridot manages to slow Bismuth's fall through using her powers on her armor at the last second. Connie declares she's got the situation, raising her sword, but Obsidian forms her own weapon, combining those of her component Gems into an enormous hilt which she dips into her second mouth, filled with lava, to gain a blade. She cuts off the hands of the Diamond mecha with it, before eventually reaching the head and roaring into the eye. The Diamond mecha headbutts a pillar, which causes Obsidian to defuse, and the Crystal Gems, Steven and Connie climb in through the Diamond mecha's eye.

Inside, Steven attempts to get through to White Diamond instead, but she responds by using her Eye Beams to take over Garnet, Amethyst and Pearl, before claiming that they are now perfect by becoming extensions of her. She claims that Steven is just Pink Diamond deluding herself about being human, having created a human child to become just for the experience. But White proves herself wrong when she pulls out Steven's gem to force Pink Diamond to reappear: as everyone watches with astonishment, the gem nearly forms both Pink and Rose before settling on a pink version of Steven. Pink Steven causes the entire room to shake when he yells at White that "She's GONE!", cracking White's pedestal and sending the controlled Blue and Yellow to their knees. As Steven is reunited with his gem, becoming whole again, White has a Freak Out, claiming that he's not Steven, he has to be Pink Diamond, and that "she" is acting like a child. Steven points out that he is a child; what's her excuse?

White is mortified to realize she's not perfect, and blushes a bright pink that extends to all of her controlled Gems and the outside of her ship, and causes the formerly white room to become pink as well. The shock of her realizing that contrary to her belief, she does have a flaw causes her to collapse and release all of her puppets from her control. The now-again Pink Pearl is confused, having no idea where she is. Blue and Yellow Diamond, meanwhile, are rather appalled to discover that White is off-color. Steven tells White, who doesn't know who she really is anymore, that he can help her with that, but she has to help heal the corrupted Gems and she's going to have to get out of her own head.

Back on Earth, Sadie Killer and the Suspects are performing a concert on the beach, with a good chunk of Beach City's residents in attendance, when the combined Diamond mecha lands directly above the stage as they perform a cover of Greg Universe's "Let Me Drive My Van (into Your Heart)". Sadie is so surprised she drops her mic, and the townspeople get a surprise when Steven, Connie, all the Crystal Gems and the Diamonds emerge from the ship. Just moments later, the Sun Incinerator lands on the beach and disgorges Lars and the Off-Colors. Rhodonite only notices the Diamonds after proclaiming that she's happy to have escaped them, and resignedly states that they're "cracked". Fortunately, Steven reassures them that things are actually okay.

Sadie invites Steven on stage, where he begins to perform "We Are the Crystal Gems" as people begin to mingle, with Lars meeting Lion and getting his cape critiqued by Ronaldo. As the song continues, the healing of the corrupted Gems is shown, with the bubbles being transported to Rose's Fountain and the Gems reforming with Steven and the Diamonds in the water. When Jasper reforms, she almost attacks Steven, but a Death Glare from Yellow and an explanation from Amethyst cause her to sink into the water in embarrassment. After the healing is done, Blue, Yellow and White head back into space with their part of the Diamond mecha, Yellow using her ship to flash Steven a V-Sign as they do. The pink leg-ship is parked in a seated posture on the hillside as Steven, Garnet, Amethyst and Pearl relax on the beach, wondering about what comes next.

Yeah, Blue wishes that you could at least be a little more specific!

Example of:
Go to Your Room!

Yeah, Blue wishes that you could at least be a little more specific!