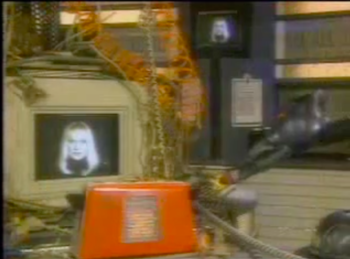 Shop talk by Holly, Talkie Toaster, and the Scutters
So what is it?
I've never seen it before, sir. No-one has, but I'm guessing it's a white hole.
—The Cat and Kryten, as everyone tries to figure out what's going on.
Advertisement:

The episode begins with Kryten restoring everyone's favourite chirpy breakfast companion, Talkie Toaster, from his previous condition of being in several thousand pieces scattered around the place after an "accident" involving him, Lister, a lump hammer, and the waste disposal unit. After much labour establishing that no-one wants any bread, toast, waffles, or anything possibly bread related, Kryten reveals why he brought the little smegger back: The toaster's a guinea pig for an experiment to restore Holly's IQ.

The experiment is tested, and it appears to work. Holly's a certified genius again. Once it's established that she also does not want any toast, currents, muffins or anything of the like, the Toaster raises a good question: If she's supposed to have an IQ of 6000, why did the read-out say 12000'? Holly quickly realises something's gone a little wrong. She is much smarter, but she's also only got a few minutes to live. She promptly switches herself off... and entirety of Red Dwarf goes with.

The Boyz, after using Kryten as a makeshift battering ram to get through the fifty-four doors between them and Holly, try turning her back on. Holly switches herself off again. A back-and-forth ensues as Rimmer tries to figure out what's going on, not getting Holly's explanation of "lifespan reduced, three minutes remaining, switch me back off" until she explains more slowly. The smeghead.

So, Lister and the Cat have to try and live without Holly, and anything electrical. It's slow going, powering everything and anything they've got by cycling. Or more accurately, by Lister cycling so that the Cat can have his heated blanket for his nap-time.

Meanwhile, as Rimmer and Kryten fetch more supplies from the cargo deck, they find things getting a little weird: Their appearances get distorted and stretched. From Rimmer's point of view, Kryten's talking slowly. From Kryten's, Rimmer sounds like a chipmunk. The Boyz take a look to find out what's going on. Turns out they're drifting towards a swirly energy thing.

Advertisement:
So what is it?
I've never seen it before, no-one has, but I'm guessing it's a white hole.

Kryten surmises that a white hole is, as the name suggests, the opposite of a black hole. Where a black hole sucks in matter, a white hole spits it out, which is why everything's getting so weird.

So what is it?
I've never seen it before, no-one has, but I'm guessing it's a white hole.

Kryten surmises that a white hole is, as the name suggests, the opposite of a black hole. Where a white hole sucks in matter, a white hole spits it out, which is why everything's getting so weird. ... like, for example, conversations repeating, and skipping about randomly. Though it'd help if the Cat stopped asking "what is it". Eventually, they manage to momentarily reactive Holly, who comes up with a plan: Plug the hole. Using a planet.

Rimmer is pretty dubious about the idea of using Lister to effectively play pool with planets, but he's outvoted. Kryten has to obey a human over a hologram, and the Cat just hates him. Lister is pretty confident he can do it anyway, with one or two... or more cans of lager for courage. This does not do anything for Rimmer's confidence, despite Lister's assurances he's not pished and he won't mish.

Lister, pished-ness indeterminate, takes the shot. Rimmer watches in horror as his shot apparently misses... and hits another planet nearby... which swings around and hits the original, sending it into the white hole.

Yep, Lister not only played pool with a planet, he played a trick-shot with a planet. Rimmer is appropriately incredulous that he apparently intended this all along. Holly comes back on, having reverted back to her normal stupid self. As Kryten explains, with the white hole plugged, the time it was spewing out has stopped existing (yeah, just go with it). And as the episode's events never happened, they'll have no memory of them, because of course, they never happened. So, as time resets itself, Kryten takes the opportunity to tell Rimmer that he is the most obnoxious, trumped-up, farty little smeghead it has ever been his misfortune to encounter!

So what is it?
Oh, somebody punch him out!