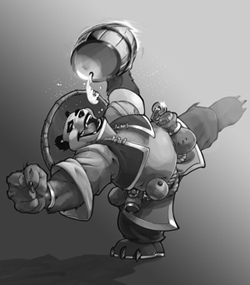 A Pandaren Brewmaster, getting punch-drunk.
"Some men are like musical glasses: to produce their finest tones you must keep them wet."
— Samuel Taylor Coleridge

You know that feeling you get when you get drunk? Like you can take on the whole world? In fiction, this is precisely what happens next.

When somebody consumes alcohol, they become much more proficient at their discipline of choice, be it fighting, studying, writing... you name it. If it involves skill, that skill will be magnified tenfold when the character is drunk. Given what may seem the obvious drawbacks of drunkenness in general, this trope may bear some relation to a Disability Superpower. Some individuals, particularly artsy types, may attribute such miracle abilities to other substances.

The Trope Namer is the Jackie Chan film of the same name, which introduced Drunken Boxing to the mainstream. Zui Quan, as it's known in China, is a real fighting style that involves mimicking the movements of a drunkard. The difference between that trope and this one is that this one is about fighting while actually drunk. Since the real martial art really doesn't work that way, you'll only see this in works that go light on real world martial arts.

Compare Addiction-Powered. If only the personality has changed, you have Dr. Jekyll and Mr. Jack Daniels. See also Higher Understanding Through Drugs, Super Serum, In Vino Veritas, Artistic Stimulation, Booze-Based Buff. In kids shows or dubs, may be replaced with a G-Rated Drug.