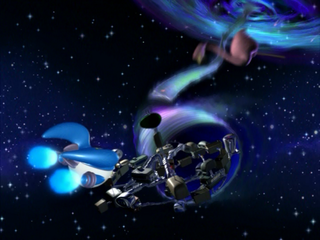 Not even the Enterprise crew ever encountered space tornadoes.note But the Voyager crew did.
"Plot complication showing up on ship's sensors now, Captain. I am switching to visual... Computer data coming in now, Captain. It's just what we need: a colossal negative space wedgie of great power coming right at us at warp speed."
— Mr. Schlock, Stardrek

The outer space equivalent of the Monster of the Week, except it isn't necessarily a creature — it can be the nebula that conveniently zaps your stardrive, or the planet with the radiation that makes you age too fast, or, well, any of a hundred similar things from Star Trek. It's unexpected, unexplainable, and puts the cast in an artificially-heightened state of crisis for 25-45 minutes plus commercials — until they find or invent the necessary cure, solution, fix, and/or repellent spray.

Except for the superficial details, one Negative Space Wedgie is very much like another — it's just a random threat, the third this month. It's a bit absurd to call them "an anomaly" (the usual term used on Star Trek) when they happen on a very regular basis, come to think of it.

Not necessarily this trope — or at least forgivable or justified — is where the phenomenon is the premise of the movie or series. In the case of a series, it must be the same phenomenon at the beginning of each episode rather than same-but-different variations. For stand-alone works, they can occur once to set the plot in motion, and perhaps a second time to conclude the story; additional appearances to create additional plot points are more a manifestation of this trope.

Not to be confused with Wedgie, nor is it an exaggerated version of the prank.

The effect of the radioactive Asteroid Thicket is described as this in Layman's Terms, since it completely drains the power from any ship it interacts with.

The effect of the radioactive Asteroid Thicket is described as this in Layman's Terms, since it completely drains the power from any ship it interacts with.