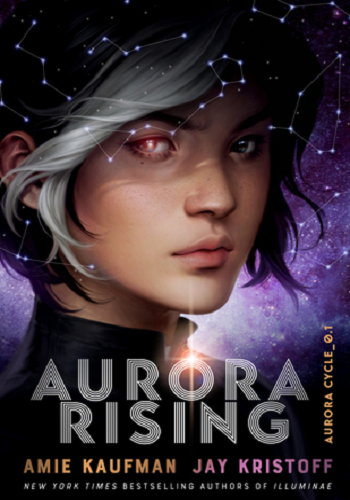 They're not the heroes we wanted. They're just the ones we could find.
The Aurora Cycle is a series by Amie Kaufman and Jay Kristoff, authors of The Illuminae Files. The first book, Aurora Rising, was published in 2019. Less than two months after the first book's release, it was announced

The year is 2380. Tyler Jones, the star Alpha cadet of Aurora Academy, misses his graduation and the Draft that would have allowed him to pick out the best squadmembers because, unable to sleep the night before, he goes on a flight into the Fold and discovers the hulk of the legendary lost colony ship Hadfield, with one survivor among the cryo-frozen colonists aboard. As a result of his heroic rescue. Ty is stuck with a Ragtag Bunch of Misfits for his squad, including his twin sister Scarlett and their childhood friend Cat Brannock, who turn down other offers to be on his team. They're joined by detached scientist Zila Madran, tech specialist with a chip on his shoulder Finian de Karran de Seel, and hot-headed warrior Kaliis Idraban Gilwraeth.

And that's not the newly-formed Aurora Legion Squad 312's biggest problem: When they're sent out on their first mission, an apparently mundane supply run, they quickly find that the girl out of time that Ty rescued, Aurora Jie-Lin "Auri" O'Malley, has stowed away on their ship. Because their real mission is protecting Auri from the sinister human military forces who are after her to silence her at all costs. Auri, you see, is not the same person she was when she went into stasis 220 years before, and has become the key to a war one million years in the making...